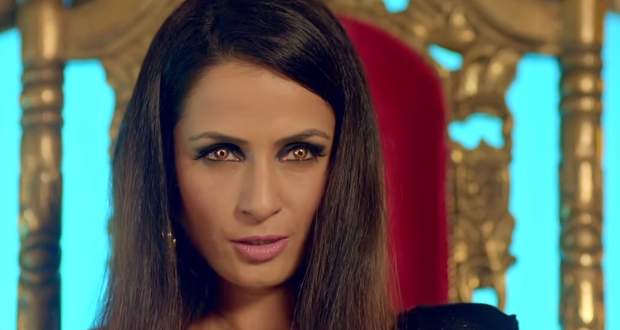 Today's Nazar 4 Oct episode starts with Rathods discussing Pratima’s powers and ways to beat her. Ansh enquires from Piya about the stone and how it can be helpful.

Pratima, Mohana, and Pari cross a market and everyone in their path stops. Meanwhile, Piya gets worried for Pari while Ansh says she will be fine.

Piya remembers something from her childhood and a box in which her mother used to keep the rock. She uses the rock to open the box and a lot of light comes out of it.

She finds a powder and a riddle inside the box. At the same time, Pratima collects her army and controls many people who follow her.

Nishant and Saavi return to find Sanam tied up and Naman missing. They learn from her that there is a Mantra in Daayan Rahasya that turns a person into a devotee of Pratimayan.

Avinash sees footage of Pratima controlling the whole of the city. Panditji says to Nishant that they also have to create an army to fight against Pratima.

Ansh wonders what Pratimayan wants while Vedashree says she knows her motives. Meanwhile, Pratima is sitting on a thrown with Mohana and Prai by her side and a lot of people as her army.

Pratima criticizes Mohana and makes her angry. She further challenges Mohana to prove her powers and create havoc.

Nishant says they have to eat the Mantra to save themselves from its effect.

Upcoming Nazar episode update: The Rathods ready their weapons to fight against Pratimyan.

© Copyright tellybest.com, 2018 & 2019. All Rights Reserved. Unauthorized use and/or duplication of this material without written permission from tellybest.com is strictly prohibited.
Cached Saved on: Thursday 6th of August 2020 03:25:55 PM