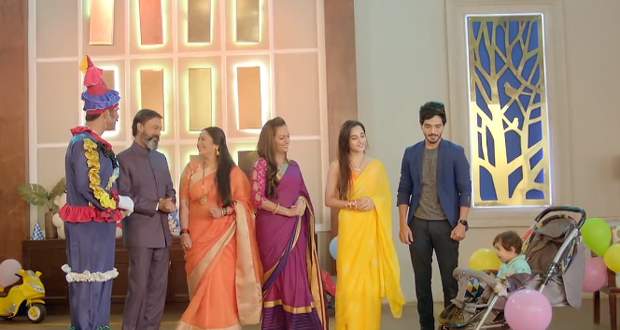 Today's Nazar 5 Aug episode starts with Piya and Ansh being sure to sacrifice their powers. Nishant asks them to put the symbols of their power in the Hawan fire.

Ansh puts his wings in the fire while Piya puts her powerful knife in the fire. The fairies take their powers along with them.

Piya is confused if they should take Adi’s powers or not. Later, they find out Adi has climbed a wall and Ansh has to get him down without any powers.

Naman and Guru Maa put Sanam in a box and discuss the powers of a witch. Naman says he will wait his whole life for Sanam.

Ansh uses a ladder to take down Adi. Adi starts crying and wants Ansh to spread his wings. The whole family sings songs to entertain him.

Adi enjoys their dance and starts laughing. Meanwhile, Nishant tries to find a way to take away Adi’s powers. He says Ansh and Piya can’t protect Adi without their powers.

He says he needs witch ash to bind the bangle. At the same time, Naman comes and says he will help get the ash. He gives Sanam’s bangle to Nishant.

Piya starts finding Adi and sees him jumping off the balcony. Ansh jumps right after him and is saved by a branch.

Everybody thinks that Piya is still having her powers. Nishant says they should concentrate on the bangle first as it will lose its glow soon.