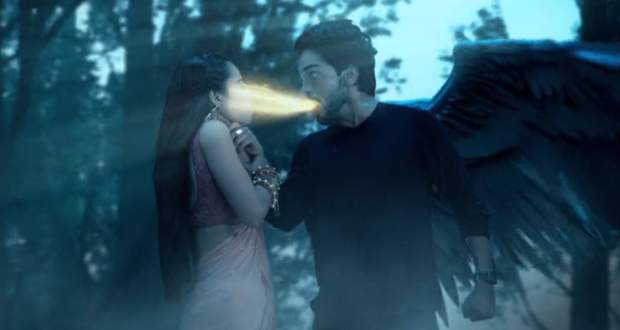 Today's Nazar 5 Jul episode starts with Ansh following Piya in the jungle. She tries hard to escape him but he is faster and stands in front of her. He holds her by the neck and tries to kill her.

The love inside him for Piya changes his actions, and he takes her in his arms instead. She realizes Ansh knows everything.

Ansh explains how he got the clue that what she did was Mohana’s plan. He had called Piya when Mohana was admitting her blackmailing. He heard everything through Piya’s phone.

He apologizes to Piya. He asks about further plans, and Piya tells him to kill her. Ansh denies, but she insists as there is no other way.

He remembers all beautiful moments and starts sucking out her energy. He comes down with her body.

Meanwhile, Nishant, Shekhar, and everyone else is discussing if they should use the capsule or not. Shekhar insists on using it, but everybody says how dangerous it is.

Mohana comes and praises his son for killing a Devik. She gives credit to his wings. Ansh remembers what Piya said about energy cup and how she will survive for a few moments after that.

Ansh demands he wants his son and only Piya knows. He threatens to kill Mohana for spoiling his life. She tells him not to kill her and that she has a way to find Adi.

On Shekhar’s request, Nishant gives him the box with capsules.

Sanam gets delighted to find tamarind. Naman tells her to concentrate on the task on hand and find clues. He finds nothing and tells everyone to head home.

Shekhar chooses one of the capsules and prays to the goddess for it being the right one.

Meanwhile, Guru Maa warns Sanam the police will arrest her now. She says she will fly like a bat and escape jail.

Naman says he has found who has killed Mausi. He tells it’s the female horse witch Panna.