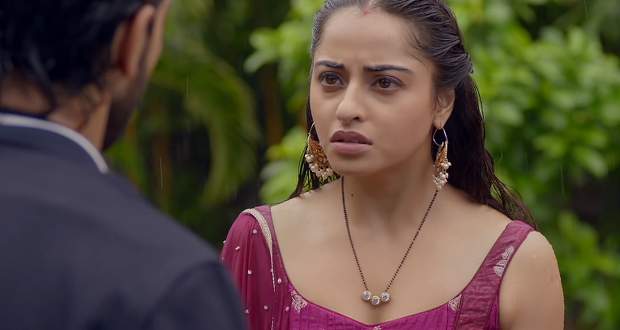 Today's Nazar 5 Sep episode starts with Rathods seeing Urvashi walking weirdly in the house. They all wonder if Mohana has done something to her.

Meanwhile, Piya is still trying to save Adi from the danger. Adi tells Piya that he knows she is his mother and wants her to save herself.

Panditji tells Rathods that they need to do some ritual to cure Urvashi. Mohana is scared that Bhasmchhaya will melt with even a single drop of milk.

At the same time, Urvashi comes but is unable to enter the Rathod house. Meanwhile, Ansh reaches to save Adi while he gets unconscious.

He starts blaming Piya for not saving Adi on time. Ansh instructs Piya to use her powers to save the car from falling while she says she doesn’t have any power.

Pari uses her powers to save the van from falling.

Piya knows Pari used her powers but still lies to Ansh. Meanwhile, Vedashree thinks Urvashi is still under Mohana’s spell and puts milk on her.

She starts burning and Panditji says that Urvashi is not a human but just an illusion.

Piya decides to find some herbs to cure Adi in the jungle while Ansh also goes with her. They both get close while finding the golden flower.

Upcoming Nazar episode update: Adi and Pari think their parents will fall in love again while Ansh and Piya are still angry with each other.