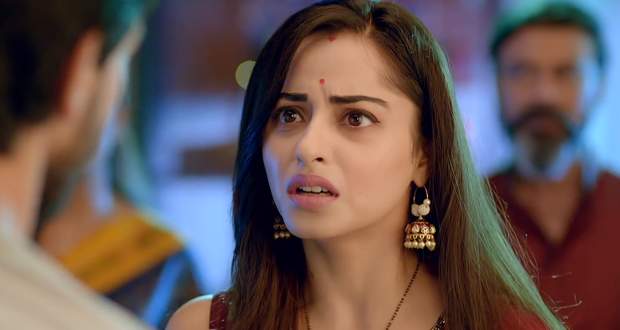 Today's Nazar 6 Aug episode starts with Nishant telling Piya to make Adi wear the bangle. He declares now no evil power will bother them as there is no power left in the house.

Later, Piya wonders how Ansh and Adi were saved without her powers. She tries to use her powers and discovers she still has some powers remaining.

Ansh decides for Piya to take the test for powers. Nishant brings a truth serum to test the reality of powers.

He says if the arrow sets on fire, then there are no powers in the house. But if there are powers, the arrow will show the source of powers.

The arrow points towards Piya. Nishant says the remaining powers can’t be sacrificed by Piya alone.

Meanwhile, Saavi apologizes to Naman for insulting his love. She wishes to show something to him. She tells him Sanam has used her 7 lives already and can’t be revived now.

Later, Piya sees a bad dream that Mohana has come to take Adi and uses her powers in her sleep. Adi gets saved by Ansh from the wooden plank.

Meanwhile, Saavi tells Naman to do the last rituals of Sanam. He gets emotional and recalls his previous memories with Sanam.

Ansh gets mad at Piya for not losing all her powers. Piya decides to leave the house for the safety of her family.

At the same time, Naman realizes Saavi has lied to him and just wants to get rid of Sanam. Saavi sets her on fire and thousands of bats emerge from the fire.

Piya seeks answers from Makshika fairy about her powers but they get scared of her.

© Copyright tellybest.com, 2018 & 2019. All Rights Reserved. Unauthorized use and/or duplication of this material without written permission from tellybest.com is strictly prohibited.
Cached Saved on: Saturday 1st of February 2020 12:28:53 AMCached Disp on: Monday 17th of February 2020 05:28:55 PM