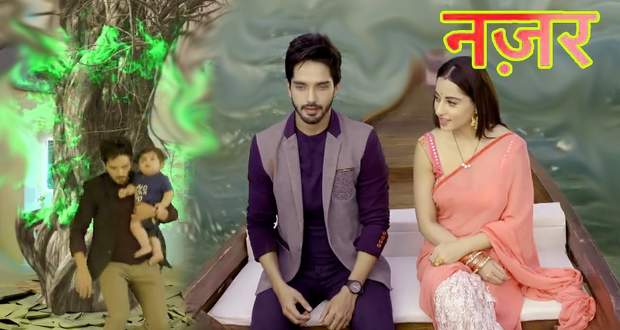 Today's Nazar 6 May episode starts with Ansh telling Piya that Shalaka enters human body through eyes. He says we should warn the family members.

Piya says by doing this we will spoil Neha’s happiness. Ansh says we will have to get rid of Shalaka soon. Piya says Shalaka is an element.

Ansh cracks an idea through this he says we will defeat Shalaka with the help of another element.

Naman mistakes Sanam as Dilruba chudail. He locks her in a cabin in Nishant’s basement. Sanam gets angry on him.

Panditji says he will bring a special person who will free the house from Kohra’s spell. Nishant warns Ansh. Ansh says has a solution.

Sanam challenges Naman to test on her if she really is a chudail or not. Naman agrees.

The Rathod family comes in front of Shalaka wearing goggles to stop her from entering their bodies through the eyes.

Ansh, Piya, and others set the dance floor on fire. A woman comes in Rathod house to set free the house from Kohra’s spell.

Tara refuses to go back to her house. Mayank gets happy on learning about Tara’s stay in the house. Tara sees footprints outside Panna’s room.

Tara decides o find about the person whom she saw earlier. Before she could search anything, Panna comes there.

Tara sees the photo of a child in Panna’s room. She gets doubtful concerning Mayank and Panna’s relation.

The written update of 6 May 2019  Nazar episode full story ends.

Upcoming Nazar episode update: Shalaka and the stranger have a face-off.