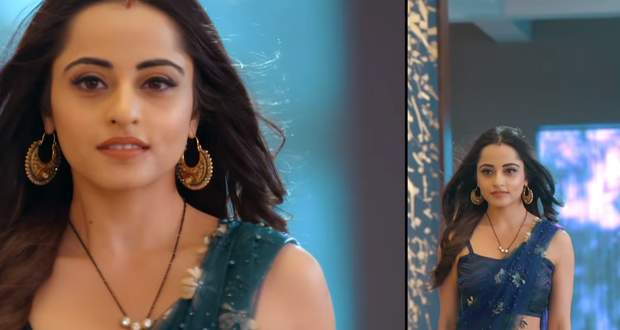 Today's Nazar 7 Feb episode starts with Ansh and Piya doing acting of fighting with each other. Mohana overhears their conversation and gets happy to see them fighting.

Mohana interrupts them and asks Piya to let Ansh be happy. She assures her that her kids will be safe with the new wife of Ansh.

Meanwhile, Naman is jealous of Saavi being with another guy and wishes to go near them. Later, Ansh convinces his family members about Piya helping him in the plan.

They just need to enact for the next two days till Daayan Amavasya. Mohana introduces Ansh with various girls and tells him about their qualifications.

Piya arrives at the same time all dressed up and announces her Swayamvar. Rathods get confused while Mohana is happy that Piya is moving on.

Piya and Ansh reveal their respective choices. Piya wishes to get married as soon as possible. Later, they both get into an argument and Ansh is jealous.

Sameer comes to meet Piya while Ansh throws him out of the house. Later, Ansh decides to tell Natasha’s family the truth while Sameer arrives again to marry Piya.

Nishant learns that Visharika’s powers are increasing and tries to inform Rathod family. He realizes that only Ekaayan can beat Visharika and if Mohana loses her powers, Piya will remain Vsharika forever.

Upcoming Nazar episode update: Ansh tries to console Piya in believing that she is a Devik.