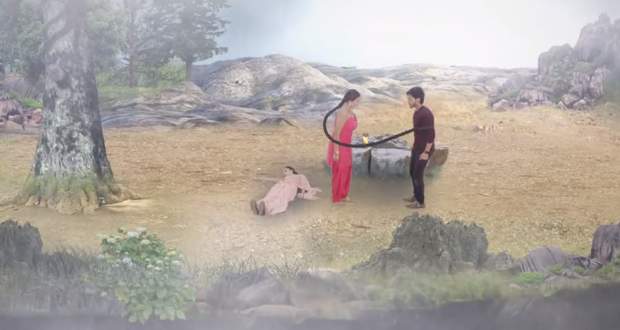 Today's Nazar 8 Jul episode starts with Ansh taking Piya to the Witch Island and Mohana following them. Mohana tells her he can use the energy cup to make Piya alive for a while to know the whereabouts of his son.

He tries reaching for the filled cup but is stopped by Mohana. She instructs him to put Piya’s energy in the cup and make her alive for some time.

He does as told but is stopped in the process by Mohana. She takes the energy cup from him, and he gets a feeling he is losing his wings.

She says it’s the result of his evil deeds as he has killed a Devik. She says he doesn’t know the power of those wings, but if she gets them, she will become the most powerful witch.

He says he will not lose his wings as Piya told him to kill her for saving Vedashree. He transfers the energy into Piya, and she comes alive.

He is not able to transfer whole energy as Mohana stops him. He fights back and is finally able to save Piya.

She throws Mohana off the island and Ansh confirms he knows where Vedashree’s energy cup is.

Meanwhile, Shekhar is positive about using the blue capsule as Vedashree’s life is in danger.

Ansh and Piya discover that Mohana has taken the energy cup of Vedashree. Piya offers to use her energy for protecting his mother.

The capsule makes Vedashree blue, and everybody thinks the capsule was right except Nishant. He says the pill was to take away the life out of a person.

Saavi is helping Naman and family in finding Panna, who is the actual criminal. She talks about Panna being after a rare stone and Sanam confirms it’s in her treasure.

At the same time, Ansh and Piya come home with energy cup to save Vedashree. Piya transfer her energy into her and she opens her eyes.

Later, Sanam goes into the cave in the form of an ant but is unable to find the rare stone. Naman is positive Panna has taken the precious stone.