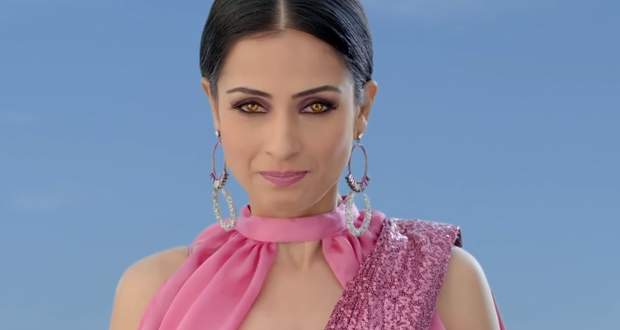 Today's Nazar 8 Oct episode starts with Ansh throwing the powder in the air to make their eyes glow. The devotees of Pratima return while Rathods gets saved from the people.

Vedashree says Pratimayan has arrived while they feel tremors of an earthquake. They also see that the Ram Setu Ban has not taken shape yet.

They decide to go fight Pratima rather than waiting. Pratima has taken a huge form who declares Ravan will win this Dussehra.

Vedashree refuses to take her side while Pratima orders Pari to fight against the Rathod family. Meanwhile, Naman tries to attack Guru Maa and Sanam.

Pari is attacked by Mohana who wants to prove herself in front of her mother. Naman also gets cured by Guru Maa’s slap.

Mohana holds Vedashree with her braid and breathes out fire. Adi tries to manipulate Mohana in his words while Piya saves Vedashree from her traps.

Pratima is unbeatable and says Ram Setu Baan will also work when they will do proper rituals and for that they need ingredients.

Sanam says the ingredients are missing from the temple. Piya tries to communicate with Adi and ask him to bring Shankh from their home.

Upcoming Nazar episode update: Pratima traps everyone except Vedashree and tortures them using her powers.