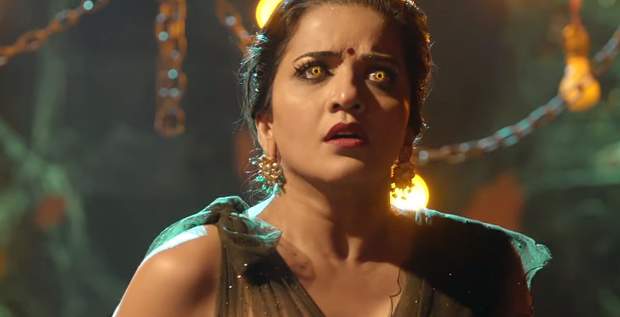 Today's Nazar 9 Jan episode starts with Ansh and Piya romancing and remembering their first meeting. They both hear Barkha’s shouting noises and Ansh thinks Abhay has kidnapped her.

Nishant says Abhay brought Barkha on his command. Meanwhile, Naman and Saavi find Mohana’s hair while Rathods tell Barkha that they are hiding her from Mohana.

Abhay reveals that Mohana was near Barkha and could have seen her. Ansh suggests that they should attack first instead of waiting for her attack.

Ansh decides to use Barkha in their plan. Barkha is scared to help them while Ansh and Piya assure her that nothing will happen to her.

Abhay also assures Barkha that he will protect her. Meanwhile, Saavi decides to use Mohana’s hair to learn about her next plan. Saavi wants to use Dafli to reach the Daayan tree.

Naman asks Dafli to not go near any tree while Dafli takes him along. Later, Mohana is attacked by some strange looking people who try to kill her.

Naman learns about Mohana’s connection with two moons. Elsewhere, Mohana accuses Chhallayans of attacking her and show her the proof.

Mohana gets shocked to see the footage and says she didn’t know anything. Mohana is upset with gaining enemies as she needs friends on two moon night.

Barkha has taken Mohana’s form and is attacking Mritki’s now. Piya helps Barkha in attacking the zombies while later Mohana finds the batch of Abhay near the zombies.

Upcoming Nazar episode update: Mohana kills Abhay and declares that she will kill everyone.