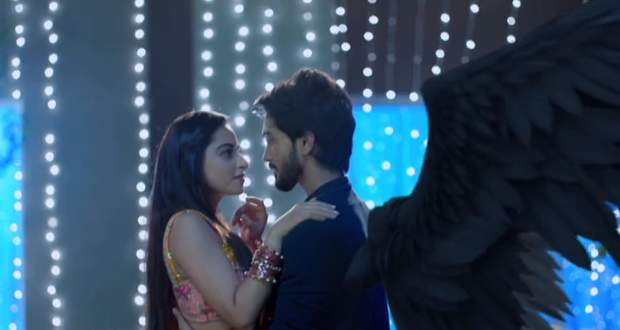 Today's Nazar 9 Jul episode starts with Vedashree assuring she is alright. Ansh tells everyone about Piya’s sacrifice of giving her life to Vedashree.

Piya says it’s not a big deal, but everybody calls her a goddess and how she has saved the entire family.

Shekhar apologizes for misunderstanding Piya and thank her for saving his wife’s life.

Naman and everyone else finds their home in bad condition and get suspicious as to what was being searched. Sanam confirms she knows what the person wanted to find in their home.

Vedashree tells Piya and Ansh to go out and have fun. They deny, but everyone forcefully sends them to enjoy and have dinner.

At the same time, Adi is about to get hit by a table when Piya saves him with her powers. The powers used by her make her weak, and she gets unconscious.

Meanwhile, Saavi and Sanam deduce that Panna came to take that coin from their house. They also realize Panna has still not found the precious stone.

Saavi says she is still in the house as there are no footprints of going out.

Ansh gets worried about Piya’s health. He takes her in his arms and flies her to a beautiful place with dinner under the stars. They both share beautiful moments while Ansh feeds Piya food.

Later, Nishant comes to enquire about Piya’s health. He confirms Piya doesn’t have full energy and is now weak.

Vedashree blames herself while Ansh asks for a way to get Piya her energy back. Nishant tells about Trishala and her powers of giving life.

Sanam and Naman are still searching for Panna. They find her behind the curtain and are about to attack but are interrupted by the police.

Nishant and Ansh go to find Trishala. Nishant gives information about her and says she has the power to heal a Reevavanshi, but it is dangerous. He also says she is living isolated to protect this power from evil.