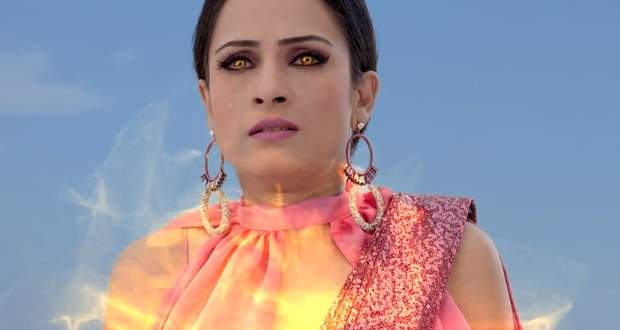 Today's Nazar 9 Oct episode starts with Piya talking to Adi and asking him to bring the Shankh of Lord Vishnu. Adi runs towards the house while Pari is send by Pratima to stop him.

Pratima traps Rathods in her braid and asks Vedashree to do as she wants. Meanwhile, Adi tries to take the Shankh while Pari tries to stop him.

Pratima starts eating their souls while Adi throws the Shankh out of the balcony. Vedashree is about to catch it but Pari is faster.

Mohana asks for the Shankh to destroy it while Piya prays to god to get Pari out of Mohana’s control. Something in Pari changes and she plays the Shankh.

Pratima and Mohana are not able to bear the sound of the Shankh while the Ram Setu Baan is also formed in front of goddess.

Piya puts the arrow in Pratima with the help of Ansh. Pratima says Vedashree has made a mistake as she is unaware of what’s inside her.

Pratima’s body gets destroyed while a braid emerges from the ashes. Mohana wishes to get the braid and become Prathmayan.

The Rathods refuse to give the braid to Mohana and join hands to save it. They bring the braid in the Pataal Ketki cave as they can’t destroy it.

Upcoming Nazar episode update: Piya is unable to join the Devik knife and decides to do its Visarjan.