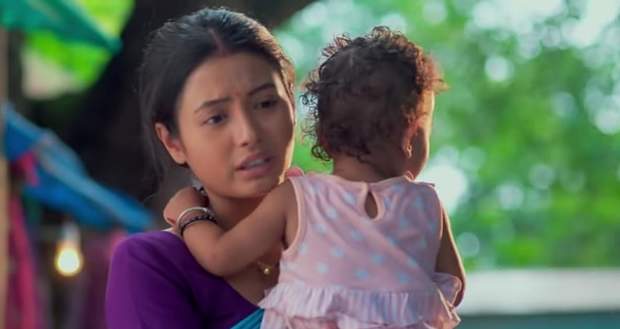 Today's Nima Denzongpa 6 September 2021 episode starts with Nima waking up in the morning at the roadside. She finds her bag is missing and looks around for it. Sia tells her that she and Mannu are hungry.

On the other hand, Suresh starts getting worried about Nima and their 3 daughters.

Meanwhile, Nima wanders in search of a job. A tea-seller gives her a job of making tell at his stall and pays her money at the end of the day.

Later, Suresh starts searching for Nima and his daughters all over the city but fails to find them. He comes back home where Tulika asks him which saree should she wear for the celebration party for Varun(her son). Suresh gets angry at her which makes her upset. She takes Varun and goes to her brother's house.

Further, Suresh and his mother go to bring back Tulika and Varun. Tulika keeps a condition of arranging a big party on the occasion of Varun's birth. Suresh agrees.

The next day, Nima continues working on the stall and her daughters play nearby. Mannu gets into a bus to hide while playing and falls asleep in it. The bus leaves from there with Mannu. Nima tells some police hawaldars to find Mannu and gives Suresh's number to contact if they find her.

© Copyright tellybest.com, 2020, 2021. All Rights Reserved. Unauthorized use and/or duplication of any material from tellybest.com without written permission is strictly prohibited.
Cached Saved on: Friday 21st of January 2022 04:15:01 PM