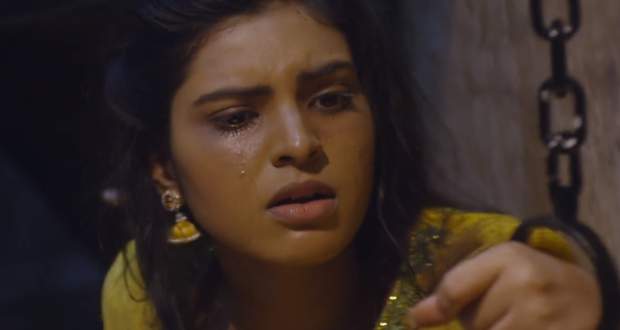 Today's Nimki Vidhayak 16 Nov episode starts with Nimki and others performing rituals of Chhath Pooja. She keeps on waiting for Mahua while Mahua and Tuney search for ginger plants.

Mahua gets kidnapped by someone while Tuney learns she is missing with just a piece of her clothing left. Some goons take Mahua in a van.

Nimki files a report while the police accuse Mahua of having a boyfriend. Nimki also thinks that Shukla has done the kidnapping while Abhimanyu tries to calm her down.

Tuney tells Nimki that Mahua was taking Parag’s name. Meanwhile, Ganga Devi asks about Parag while at the same time, Nimki arrives calling out for Parag.

Ganga Devi asks Nimki about her arrival while Nimki accuses Parag of kidnapping Mahua. Nimki also threatens to not spare Parag if he is involved in Kidnapping.

Ganga Devi asks Nimki to move out of her house and asks Shankar to not let Nimki return in her home. She further says she will punish her son if Parag is involved.

Parag gets a call from her mother asking if he has kidnapped Mahua. She further threatens to kill him if he does anything to Mahua.

Parag sends Mahua to his mother’s godown to get saved. Mahua is shifted to a new location where Mintu is also kept.

The written episode of Nimki Vidhayak serial upcoming updates: Mahua and Mintu team up to escape the godown.