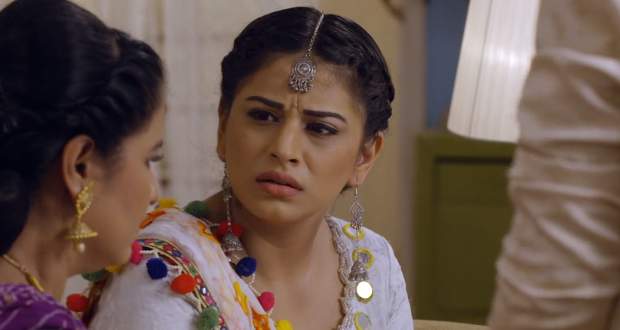 Today's Nimki Vidhayak 19 Oct episode starts with Nimki slapping Parag and warning him not to speak loudly. Ganga Devi asks Shankar to solve the matter as soon as possible.

He tells Mishra to take the press and decides to solve the problem on her own. Nimki gets shocked to learn that Parag is the son of Ganga Devi.

Ganga Devi questions Maua about the events and doesn’t let Nimki speak. Maua runs to Chachi and asks her to take her home. She wants Nimki to leave the matter as Maua didn’t say anything. Later, Mishra says they don’t need to kill Nimki now.

Ganga Devi gets mad at his son for spoiling her image and reminding her of her husband. Parag wants his mother to destroy Nimki.

Nimki is upset with Maua’s behavior while Maua sends Chaachi and her son away. Shankar comes to talk to Maua and wants her to dissolve the matter.

Later, Mintu is suspicious of her Daadi hiding something about Ganga Devi. Meanwhile, Maua gives her statement about Parag not being wrong and helping her.

Nimki gets really upset with Maua’s statement and doesn’t want to hear her name. Later, she learns that Tuney saved her life from Mishra’s goons.