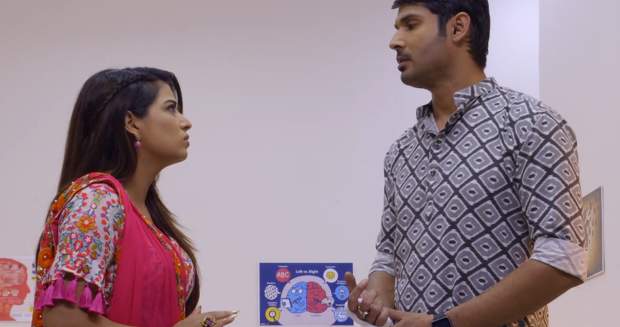 Ganga Devi interrupts them and tries to teach politics to Nimki. She instructs her to keep meetings in a hotel and says she has already talked to them.

Meanwhile, Chachi is scared of a ghost while Maua informs about getting selected in a tennis tournament. She refuses to invite Nimki in her game.

Later, Tuney arrives home and is worried about his job. He asks about Nimki while Maua doesn’t like him caring about Nimki.

Tuney learns about Maua’s selection and gets really happy. Meanwhile, Nimki is with Anaro who opens the gift given by Mintu. There are sunglasses in the gift pack.

Anaro enquires about Babbu aka Mintu and is happy that he didn’t turn evil. Anaro asks if Babbu will come while Nimki knows she needs to talk to him.

Mintu is confused if he should work for Shukla while his friends wonder if they should convince Nimki. Nimki arrives at the same time and Mintu wishes to talk to her.

He apologizes to Nimki and wishes to talk to her. He further refuses to meet Anaro and says if Nimki doesn’t vote in Shukla’s favor then he will never meet Anaro.

Nimki asks him to support Ganga Devi and takes guarantee of his protection. He again threatens to reveal the truth of him not being Babbu.