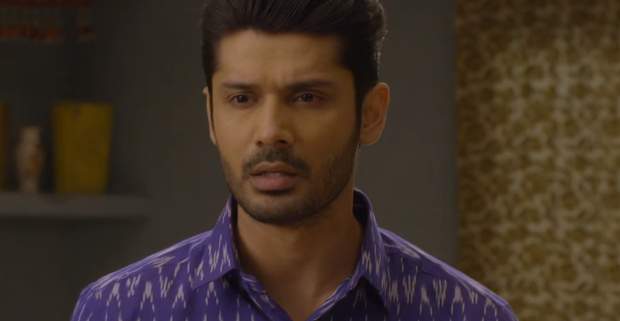 She further tries to entice everyone including Tripathi against Shukla Ji. Tripathi refuses to take sides with Ganga Devi while party members think they will get insulted by the media and public.

Nimki advises them to say ill against Shukla Ji before he starts blaming them. Meanwhile, Mintu wants to cheer up Daadi by making a video.

Mintu learns that Daadi has already left with a bag and receives a video message from her. She says she has gone to help her friend and will be back soon.

Mintu is sure that Daadi is lying and discovers his photo with her is also missing. Mintu is shattered while Anaro asks him not to cry for her.

Anaro starts bursting balloons and is happy that Daadi left. Mintu gets angry at Anaro while she doesn’t want to hear anything.

Anaro declares that she will kill Daadi if she returns while Mintu grabs Anaro by the neck. Mintu feels guilty for behaving in such a way and misses Daadi.

Later, Ganga Devi calls Nimki and shows her the press conference of Tripathi. Tripathi declares that he has given resignation to the party head.

The written episode of Nimki Vidhayak serial upcoming updates: Shukla Ji gets angry at Nimki for double-crossing him.

© Copyright tellybest.com, 2018 & 2019. All Rights Reserved. Unauthorized use and/or duplication of this material without written permission from tellybest.com is strictly prohibited.
Cached Saved on: Friday 17th of January 2020 07:11:33 PMCached Disp on: Wednesday 22nd of January 2020 05:29:33 AM