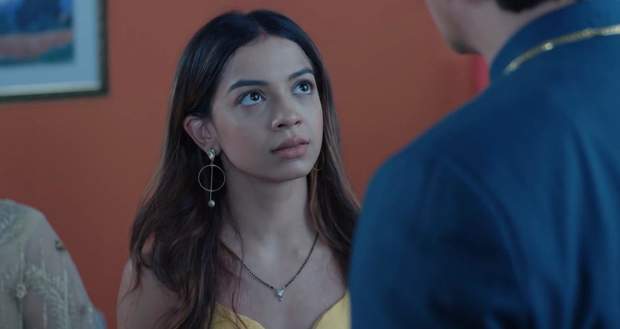 Today's Pandya Store 10th April 2022 episode starts with Gautam setting up a nursery for Rishita’s baby thinking that this would make Rishita happy. He plans a picnic and tells Dev to bring Rishita as well.

Gautham goes to Dev’s room and lays beside Dev. Shiva sees them and lays with them as well.

Dhara sees this and prays that they stay together forever.

The next morning, Gautam asks Dev to bring Rishita to the beachside for the family picnic, as she doesn’t pick up Gautam's call.

Later, Dev tells everyone that he is leaving as he has to take care of Rishita and his child.

Sumon gets upset at him and says that he is just concerned about Rishita. She says that Rishita wanted to be separate and keeps finding reasons.

Rishita feels happy to see Dev but he starts crying, saying that the family is upset.

Dev tells that they could go back after delivery but Rishita refuses and asks him to stop talking about the matter.

Meanwhile, Shiva gets frustrated to know that Dev has left.

They plan to keep Dev and Rishita with them for good.

Shiva comes to Seth's house and Dev and Shiva get into a fight.

Kamini stops Janardhan from involving. Rishita shouts at Shiva and asks him to leave.

Shiva curses Janardhan for separating them and leaves the house.

Kamini taunts Dev, by saying that Shiva shouldn’t have treated Dev this way in their presence.

Dev and Rishita have a romantic dinner

Dev seems to be disappointed, meanwhile, Dhara calls him.

Dev scolds Rishita and he asks her to talk to his family, which makes Rishita angry.

Shiva stops him. Gautam says that he doesn’t feel going home and asks Shiva to leave.

He starts drinking again and starts crying, Shiva consoles him.

The next morning, Dhara calls Rishita and gets happy when Rishita picks up her call.

She asks her to come back but, Rishita refuses.

Meanwhile, someone comes to the Pandya house, to get some documents signed by Rishita from Sagar, from her office and Shiva sends him back.

Later, Gautam asks Shiva to get the payment book from Dev’s room.

Sagar shouts at Rishita for not signing the papers, he says that he had lost a deal due to her.

She comes to know that it was due to Shiva and gets frustrated.