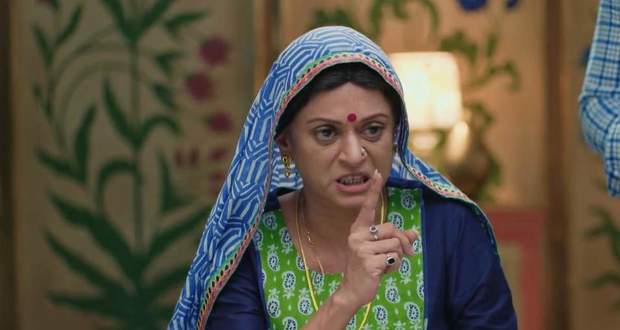 Today's Pandya Store 10th August 2022 episode starts with Dhara walking in the market with the baby asking about the baby's mother while Gombi is searching for her there.

Just then Dev, Shiva and Krish come to Gombi for help.

Gombi looks happy to see them that they have not left him alone in his time of need.

Both Dev and shiva get angry at Gombi for thinking so poorly of them.

Just then Dhara comes there while Shiva tells her to not do anything so impulsive ever again. Gombi gets furious at Dhara and scolds her for leaving the house with a small baby without telling anyone.

Dhara apologises to him while Shiva asks Gombi to control himself in public.

Suman also thanks God for bringing Dhara back and tells Raavi to do Aarti.

Later, Dhara apologises to Suman for leaving the house without thinking and that she will never do it again.

However, Suman explains to Dhara that she has gone to the police station to get the solution to Cheeku’s problem as to how to keep him permanently with them and that Dhara misunderstood her.

Just then, Raavi gets a call and goes to conduct the show telling Suman that they will celebrate Cheeku’s return after her return.

Gombi and others fill out the foster care form when Rishita remembers Raavi’s show and switch on the TV.

Raavi is looking radiant in the blue full-length dress which makes Shiva happy that Raavi has chosen wisely.

Dhara also praises Raavi and how she has made a name for herself.

Gombi tells Suman that they should give a party to Raavi for her success while Suman tells her that Raavi will not accept a party from her when he has not accepted her party the other day.

Meanwhile, Shweta finds her parents leaving for Somnath to search for Cheeku and stops them saying she is not well enough to care for the baby.

Shweta’s mother agrees to wait but tells her that they will have to get the baby back soon whereas Shweta does not want her baby back as it is a reminder of her horrid past.

Meanwhile, Gombi comes with the news that the forms for adoption are filled and soon the process will begin.

Everyone enjoys the moments and sings and dances with Cheeku as the centre of attention.