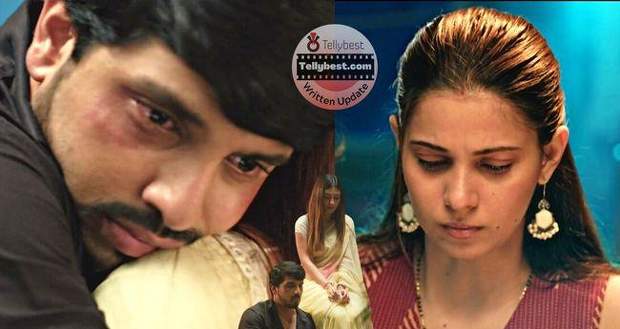 Raavi starts punching Shiva once he enters the boxing ring but Shiva does not raise his hand.

During the fight, Raavi yells at Shiva for using Dhara as a shield to make her lose her job and does not let Shiva say anything.

She continues beating Shiva causing him to fall to the floor while wincing in pain.

On the other hand, in Shweta’s home, Jhankana orders Harikishan to take his meds as his BP is high but Harikishan mutters that his daughter is out begging on the streets so his BP is bound to increase.

Harikishan even informs Jhankana that he is going to bring Shweta home without her permission but before Jhankana can respond, she gets a call from Dhara who informs her about Shweta’s pitiful situation due to begging.

After Jhankana cuts the call, she urges Harikishan to go with her to bring Shweta home.

Meanwhile, noticing Shiva on the ground, Raavi sits on his chest and starts accusing him of not liking her working with an angry growl.

However, catching Raavi’s hands, Shiva rolls them over so he can come on top of her and informs Raavi that he has no problem with her working much to Raavi’s shock.

Shocked Raavi quickly gets up and continues blaming Shiva for not wanting her to work while Shiva keeps repeating his words.

Throwing the gloves at Shiva, Raavi walks away from the boxing ring but Shiva yells that he does not have any problem with her working and her boss but he does not like when someone lies.

While Raavi stands there with her back turned towards Shiva, Shiva reminds Raavi that he does not like lies while Raavi announces that she was trying to shield Shiva as she knew the truth will harm him.

Shiva however tells Raavi due to the lies he started getting suspicious of her and Arnav’s relationship and even confesses to Raavi how much he loves her.

Shiva then begs Raavi to give him one more chance with tears in his eyes and Raavi embraces him in a hug.

Afterward, Raavi mutters that she has already lost her job so if she loses her husband now life will be boring and Shiva announces he will talk to Arnav so he gives Raavi her job back but Raavi denies it.

Raavi announces that she has a condition when Shiva urges her to come home.

Later, Harikishan and Jhankana find Shweta in a very bad condition, and seeing them Shweta begs from them too making Jhankana emotional.

On the other hand, Rishita tries to make Dhara understand that she is again getting emotional but Dhara yells that she is doing what is right.

Meanwhile, Raavi lights up a matchstick and urges Shiva to take some more oaths.

After the promise ceremony, the host informs Shiva that he has won despite losing and offers the money but Raavi takes it as she is the winner.

Shiva happily remarks that no husband can win against their wife.

On the other hand, despite Jhankana and Harikishan’s urging, Shweta refuses to come with them and Hariksihan along with Jhankana walks away.

© Copyright tellybest.com, 2022, 2023. All Rights Reserved. Unauthorized use and/or duplication of any material from tellybest.com without written permission is strictly prohibited.
Cached Saved on: Wednesday 25th of January 2023 09:52:45 AMCached Disp on: Wednesday 1st of February 2023 06:24:23 PM