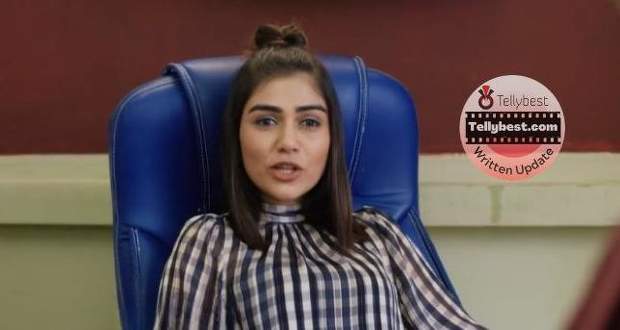 Today's Pandya Store 10th January 2023 episode starts with Gautam telling Krish that he knows about the selling of their shop.

Krish gossips about the old lady who lived with Shweta becoming Mansukh’s girlfriend.

In the Pandya store, Shweta welcomes the old lady and Mansukh Bhai and counts the registry money.

The old lady asks Shweta for 1000 Rs but she refuses to give her one.

Mansukh Bhai informs her that the Pandya family is selling their house.

Hearing the news, Shweta gets happy as she waited for this moment for so long.

Meanwhile, at the house, Dhara hugs Krish and confused Krish asks her why she is so happy hearing the love story of the beggar and Mansukh.

Dhara claims that now Shweta will come to buy their house but they will refuse him as she will feel suspicious why they agreed straight away.

On the other hand, Shweta postpones the deal as she wants to see the destruction of the Pandya family.

Meanwhile, Dhara plans to use the beggar lady against Shweta as the lady is only a gold digger.

Later, Dhara walks in front of Shweta with a long veil and drops a pamphlet intentionally.

Shweta takes the pamphlets from disguised Dhara and states she will help her paste them.

Afterwards, Dhara smirks when Shweta walks towards Pandya's house and she also informs Raavi and Rishita to start their act.

Raavi and Rishita are standing in front of their house buying vegetables, Raavi acts to cry stating their financial crisis.

Rishita and Raavi indirectly fill Shweta’s mind that she should buy Pandya's house.

Shweta walks into the house sassily, picks up a carrot, and starts eating it.

She tauntingly asks them how their life is going and states that she is ready to buy their house as she also ate the salt of this household.

Suman starts to do overacting which makes Shweta suspicious while Raavi holds Shweta’s hand in happiness.

Dhara walks to them and separates their hands in fake anger.

She blames Raavi and Rishita for being a flipper and announces she will not sell her house to Shweta at any cost.

Shweta taunts Dhara and says she will make everyone die out of hunger but Dhara refuses to listen to anything.

Meanwhile, Shweta asks Suman to sell their house to her but she does too overacting and starts to throw vegetables at her.

Rishita and Raavi sit at Suman’s feet to calm her down and make their plan seem more real.

Dhara drags Shweta out of the Pandya house and slams the gate in her face while Shweta decides to have the place at any cost.

Later, Dhara and Rishita order Krish to keep an eye on Shweta and talk to the beggar lady.

In the Pandya store, Shweta is thinking about how to take ownership of Pandya's house and she picks up a bottle of poison.

Krish sees the bottle and gets scared that Shweta might hurt Dhara for insulting her.

© Copyright tellybest.com, 2022, 2023. All Rights Reserved. Unauthorized use and/or duplication of any material from tellybest.com without written permission is strictly prohibited.
Cached Saved on: Wednesday 25th of January 2023 03:12:02 PMCached Disp on: Monday 6th of February 2023 05:13:52 AM