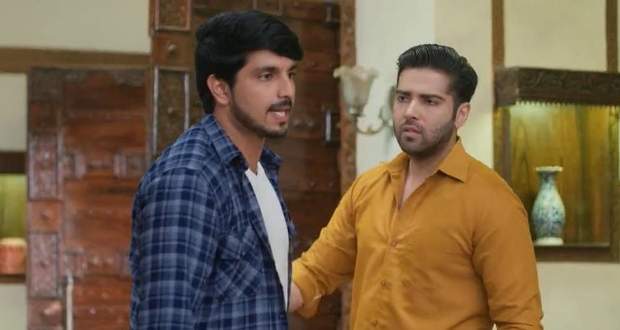 Today's Pandya Store 10th June 2022 episode starts with Gautam trying to save his face from being seen while Suman and Rishita notice the injuries on their faces.

However, Gautam and Dev manage to lie to the family and change the topic to Shiva's birthday party.

Elsewhere, Shiva sees a beautiful gown and tells the owner to keep it for him after reading the price tag that states the price of 1500 rupees.

The next morning, Raavi wakes up Shiva happily while he gets hesitant and asks her for a kiss every hour as his present for the birthday.

Raavi happily kisses him on the cheek and further apologizes to him for not bringing a gift for him.

Shiva again romantically says that she is the best surprise for him when the rest of the family members come there to wish Shiva.

Later, both Krish and Gautam ask Dhara for money while she tells Gautam to manage as paying for Krish's fees is more important.

Just then, Raavi also comes there and requests money from her for buying a gift for Shiva.

Both Krish and Gautam make excuses and leave without the money while Raavi takes only 500 rupees and leaves.

Further, Raavi notices the gold ring on her hand and thinks to sell it to get some money for the family.

After some time, Dhara is taking Aarti of Shiva when he suddenly falls making her and Gautam worried.

However, Shiva reassures her saying that he's fine, and leaves.

At the same time, Raavi sells the ring for twenty-five thousand and tells the buyer to take extra care of the ring.

Later, Dev talks to someone on call and says that Jeevanlal will get payback for snatching their land.

However, Rishita overhears this and creates a commotion leading the whole family to learn about it.

Raavi starts blaming herself while an enraged Dhara tells her to not think too much about herself and let the family focus on the problem at hand.

Shiva tries to go to Jeevanlal but is stopped by Dev and Gautam.