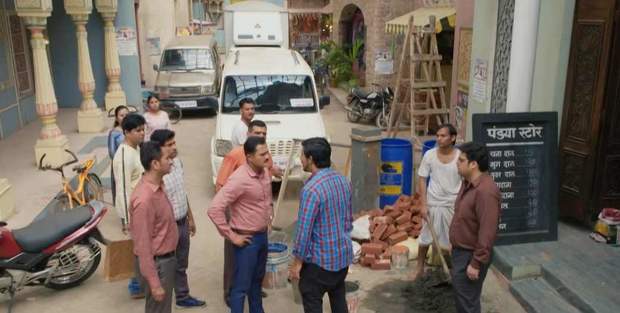 Today's Pandya Store 10th May 2022 episode starts with Raavi coming to the terrace to sleep for the night. There she discovers Shiva and starts touching him but Shiva catches her.

Afterwards, the couple shares a romantic moment between them. Meanwhile, a little flashback shows how they got nervous after seeing the decoration in the room and decided to sleep outside.

In the morning, Dev arrives to surprise Rishta at Seth’s Household.

Seeing Dev, Rishta gets excited and starts explaining everything about Shiva’s winning and her mistake but Dev hugs her.

The loving gesture shuts Rishta’s mouth. He tells Rishta that he is going to meet his family.

At the same time, Janardhan explains his plan to Kamini about destroying the Pandya store with his power.

As predicted, Dev hears the part and decides to tell Shiva about it.

In the Pandya household, Gautam is discussing Pandya store expansion with a contractor. He orders Shiva to give the contractor 10% money in advance.

Embarrassed Shiva leaves and goes to his coaching.

Meanwhile, Dev arrives at the doorstep and hugs Gautam. He explains that after hearing about Gautam’s accident he came back very soon.

Dhara apologizes to Dev for locking him but Dev says that it is ok. After that Dhara and Dev share an emotional moment between them.

After the reunion, Dev leaves for his store.

Later, Dev approaches Shiva to ask him if he has got the permission from Municipality. But angry Shiva replies that Dev is just jealous.

After hearing the comment, Dev goes back to his store.

A few moments later, a few officers from Municipality arrives at Pandya Store.

Confused Shiva asks them the reason for their arrival while the officer replies that Shiva has no permission. They accused Shiva of illegal activity.

After that, they start smashing the bricks one by one. Stunned Shiva just watches them silently and starts thinking about his childhood memories of the store.

Later when the Pandya store hoarding is about to fall, Shiva runs to catch it. Dev also comes forward and together they catch the hoarding before it could fall.

© Copyright tellybest.com, 2020, 2021. All Rights Reserved. Unauthorized use and/or duplication of any material from tellybest.com without written permission is strictly prohibited.
Cached Saved on: Friday 30th of September 2022 07:57:50 PMCached Disp on: Saturday 1st of October 2022 05:44:57 PM