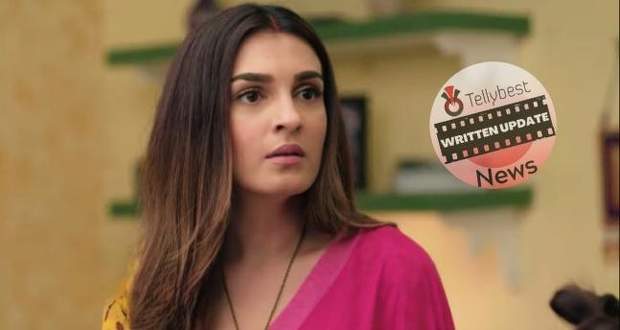 Today's Pandya Store 10th September 2022 episode starts with Raavi lying to the family that she has to go to Arnav who is a child and wants her help in becoming a social media star.

The whole family turns to Dhara for help but she refuses after everyone makes Krish the scapegoat.

Meanwhile, Suman talks to her husband's frame and gets upset thinking that no one remembers her birthday.

However, Suman calms herself by saying that the kids must have planned a surprise for her.

Later, Panditji comes to the Pandya house to inform them that Suman asked him to do the pooja.

The family gets worried and tells the Panditji to go to the temple while Suman comes into the hall.

Pandya brothers go to the shop while Dhara and Rishita talk about making simple food for dinner which angers Suman.

Suman leaves while Dhara decides to go to the temple so that the Panditji doesn't reveal the truth.

Later, Suman's neighbors wish her a happy birthday and ask about the party while Suman lies that she has decided to not host a party this year as they spent a lot on the renovation of the house.

Meanwhile, Swetha talks to Forum on call and tells her to reach the Pandya house on time so that they can execute their plan amidst all the chaos.

Elsewhere, the Panditji tells Dhara and Raavi to add the names of everyone under Suman in the family tree as they will also get blessings.

However, Suman sees them and gets upset thinking that they have also forgotten to tell her name to the Panditji.

Afterward, Swetha gives juice to the whole family as they are preparing for the party when she suddenly collides with Krish.

He manages to save her and goes to change his clothes when Chiku starts crying.

Swetha rushes to the room while Krish gets shy and runs away from there.

Later, Dhara gets Chiku ready in new clothes for the party while Swetha comes there and tries to convince Dhara to adopt him.

Rishita comes there just then and scolds Swetha for playing with Dhara's emotions.

However, Swetha stops her and lies that she was just consoling Dhara but Rishita warns her to not joke about anything like that ever again.