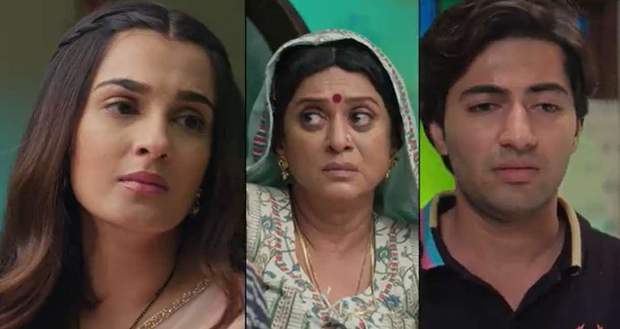 Today's Pandya Store 11th April 2022 episode starts with Raavi trying to console Dhara as she is upset with Rishita and Dev leaving the house.

Rishita comes to the Pandya House, the whole family gets excited about seeing her.

She starts shouting at Shiva for sending back the documents sent by Sagar.

Rishita calls Shiva uneducated and insults him, the family gets shocked hearing her words.

Dev then comes to the Pandya house and he tries to stop Rishita.

Rishita tells him that Shiva had sent back the documents from her office and that Sagar had fired her.

On hearing this, Dev asks Shiva to apologize to Rishita for his mistake to solve the matter.

She takes the side of Shiva and supports her husband.

Rishita mentions that even Raavi used to dislike Shiva earlier.

Rishita mocks that with time one can start to love an animal and says the same has happened with Raavi.

Dhara, Dev, and Raavi stop her from saying further, Shiva is hurt by Rishita’s words and leaves the house.

Rishita complains about the way the family treats her and Dhara says that it is due to her attitude, Rishita starts arguing with Dhara as well.

Raavi stops her and asks Dev to take her back.

She says that she would educate Shiva and Rishita mocks her.

Raavi removes her anklet, which she was gifted by Shiva, and says that she would wear it only once she gets Shiva educated.

Rishita discourages her, Dhara asks Dev to take her home and Rishita starts questioning her right to say so.

Suman interferes, she asks Rishita to get out of her house while Rishita leaves the house frustrated.

Suman accuses Dev of not trying to convince Rishita and leaving the house with her instead.

Dev apologizes to her and asks the family to forgive Rishita and leaves the house.

Shiva is hurt by Rishita’s words, Raavi calls him but he doesn’t pick up her call.