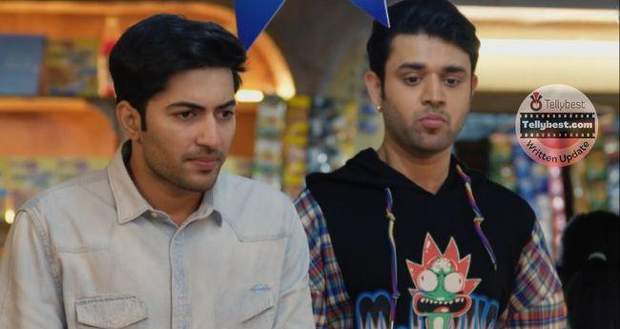 While Rishita and Dhara run to welcome Raavi with rice Kalash and aarti thali, Suman watches it with a grin.

After the aarti, Dhara offers her hand but Raavi enters the Pandya house ignoring it as she recalls Arnav’s words.

Meanwhile, when Raavi lowers her feet to get Suman’s blessing, Suman tells her that last night she sweetly asked Raavi to stay but she walked away, and after Shiva’s begging, she has come back with a grin on her face.

Suman even announces that Raavi does not care about her authority since she earns her own money and has Shiva wrapped around her finger while Raavi just smiles.

When Suman announces she does not discriminate between daughter-in-law and daughter, Rishita reminds Suman that she does not have any daughter.

Suman however informs Rishita that she was just giving a reference and Raavi happily distributes crackers among everyone to celebrate her homecoming.

Raavi then hugs Rishita but purposefully ignores Dhara which shocks Shiva and he orders Raavi to touch Dhara’s feet.

Raavi replies sternly that she will take Dhara’s blessing later and Dhara questions Raavi if she is angry with her to which Raavi sarcastically replies that it is the problem Dhara does not know what she has done wrong.

Raavi further adds that because of Dhara, she has lost her job in a stern voice.

Hearing Raavi’s words, Suman yells that now she knows Raavi has come back because she has lost her job.

When Raavi tries to deny it, Suman announces Raavi was able to forgive Shiva even though he has behaved very rudely with her but Raavi does not want to forgive Dhara who has always stood with her during thick and thin.

Dhara however informs Raavi that she has done whatever she thought was right at that time since Raavi and Shiva are her children first before being husband and wife.

On the other hand, a lady tells Gautam that it does not look good that the Pandya family’s daughter-in-law is begging on the streets.

After the lady walks away, Dev informs Gautam that they need a permanent solution to the Shweta issue and Krish mutters he will find the solution soon.

Later that night, Dhara arrives at the Basti and orders a bunch of kids to give food packets to Shweta for Chiku without telling her that it was her.

However, when the kids give food packets to Shweta, Shweta throws them away while yelling she knows it is Dhara's idea.

Hearing this, Dhara calls Jhankana to urge her to do something but Harikishan cuts the call after blaming Dhara for Shweta's bad behavior.

Afterward, while Krish urges Guatam to give money for the lawyer fees so he can divorce Shweta, Dhara arrives there and begs Krish's forgiveness.

On one hand, Krish and Dhara are busy discussing Shweta; on the other hand, Suman orders Gautam to bring Chiku home at any cost as Shweta does not deserve to be a mom.

© Copyright tellybest.com, 2022, 2023. All Rights Reserved. Unauthorized use and/or duplication of any material from tellybest.com without written permission is strictly prohibited.
Cached Saved on: Wednesday 25th of January 2023 09:13:38 PMCached Disp on: Thursday 2nd of February 2023 08:40:58 PM