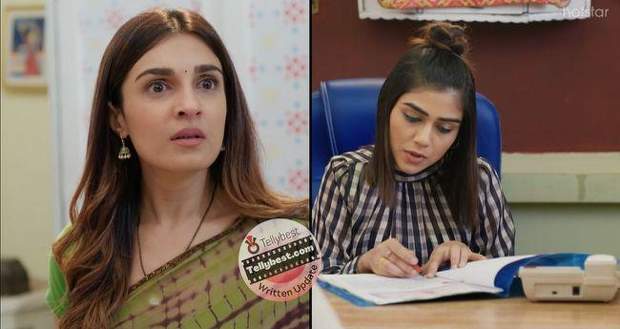 Today's Pandya Store 11th January 2023 episode starts with Dhara, Rishita and Suman waiting for Rishita to come back and inform the good news about the beggar lady.

Raavi blames Dhara for underestimating them (Rishita and Raavi) and states she will blame her if her plans fail.

At the same time, Rishita runs inside and informs them that Shweta reached there when she was talking to the beggar lady.

Dhara scolds Rishita for not doing one thing she was asked for but she starts to blame Dhara’s plan.

In the hospital, Shweta’s father reached there hastily after getting a call about Shweta’s attempt at suicide by drinking poison.

Shweta cries and pretends that she is regretful for scamming the Pandya family.

She scams her father into agreeing to buy Pandya house and states she has kept the Pandya store for Chiku.

On the other hand, Krish comes running to the house and informs the family that Shweta drank poison and the beggar lady took her to a rundown hospital.

Everyone gets happy thinking that Shweta will die but Dhara claps laughing at Shweta’s clever mind.

Dhara cracks Shweta’s plan that she wants to buy Pandya's house through her parents.

At night, Raavi goes to Shiva to give him medicines but he stubbornly refuses to take any.

Raavi insists he take his medicines so his health does not deteriorate more while everyone is working on Dhara’s plan.

Seeing that Raavi is not confident about Dhara’s plan, Shiva holds her hand to his cheek and assures her to believe in her family if not Dhara.

The next morning, Dhara walks to the beggar lady and offers delicious food served on a plate.

The beggar lady asks Dhara if has poisoned the food but she assures the beggar lady that they need her help in getting back Pandya's store from Shweta.

The beggar lady asks for 1 lakh rupees as commission and Dhara agrees to her offer stating that the Pandya store is the only ray of hope to keep her family together.

Suman refuses but Raavi and Rishita insist on selling the house.

The man gives 25 lakhs in advance and gives them three days of time to decide.

Later, Gautam and Dev walk into the house and inquire about the money.

Suman scolds Raavi for being emotionless and states that she will never sell her ancestral house.

Dhara enters the house announcing that the beggar lady has agreed to their plan.

However, Rishita and Raavi want to sell the house instantly but Dhara sticks to her plan.

Suddenly Krish enters and informs that the cash is sent by Shweta’s father, basically the house is being bought by Shweta.

On the other hand, Shweta dances in happiness when her father tells her that he had sent 25 lakhs in advance to urge them to sell their home.

In Pandya's house, everyone is shocked at Krish’s words as they were about to take Shweta’s bait.