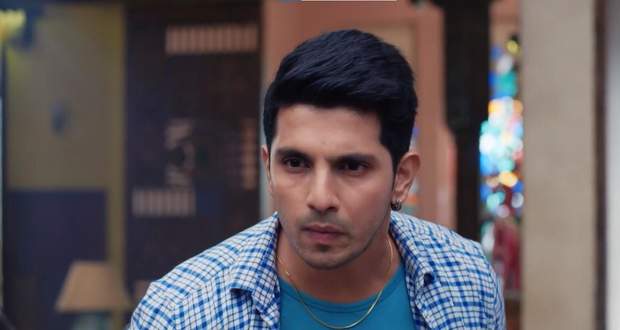 Today's Pandya Store 11th July 2022 episode starts with Raavi, Dhara, and others trying to scare Jeewanlal while Dev drives his pickup truck as a ghost.

At the same time, Prafulla arrives with Janardan and Kamini in their car while Dev sprays pepper spray in their eyes to keep them away.

On the other hand, Gombie hangs Jeewanlal upside down and the Pandyas scare him to return back Shiva's land.

Raavi records Jeewanlal's confession on her phone while Shiva asks him some more questions to make sure they get full evidence.

Further, the Pandyas hand over the papers to Jeewanlal and he finds out that they are not ghosts but Pandyas instead.

Pandyas try to tie Jeewanlal while Prafulla arrives and tries to threaten them by calling the police.

Meanwhile, Gombie hints Dev to escape and Dev covers Janardan and Prafulla's faces and runs away.

Further, the Pandyas run towards the police station and Janardan follows them in his car.

Later, Rishita arrives at the police station and scolds Janardan.

On the other hand, Shiva explains his side of the story and how he got saved by the fisherman's family.

Gombie asks the police officer to give them some time as they will sell their land to return all the insurance money.

Further, the police appreciate Gombie's honesty but they cannot do anything except arrest Shiva as it is a fraud in the eyes of the law.

The police suggest the Pandyas talk to the insurance company to give them some time limit as they were the ones who are the real ones in charge of the money.

Further, Shiva is taken to the lock-up as the complaint is filed against him.

© Copyright tellybest.com, 2022, 2023. All Rights Reserved. Unauthorized use and/or duplication of any material from tellybest.com without written permission is strictly prohibited.
Cached Saved on: Friday 27th of January 2023 11:42:31 AMCached Disp on: Thursday 9th of February 2023 08:44:44 AM