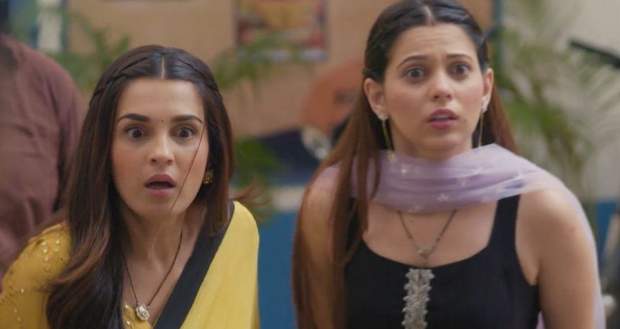 Today's Pandya Store 11th May 2022 episode starts with Dev and Shiva shouting at the officers to not touch the board while Rishita, Raavi, and Dhara reach the place.

Dev berates Shiva for not taking the permission while the ladies come to the front.

Dev and Shiva argue with the officers as they threaten to close Dev's shop too.

Getting scared, Rishita demands Dev come back to their store but he doesn't budge from his place.

Rishita goes back to her store while Janardan learns this and gets furious at Dev's actions.

Back at the store, the officer tells the Pandya family that they will have to pay thirty thousand rupees fine and take the goods from the municipal corporation themselves.

Dev promises them that he will not let the shop be closed for too long and goes back to his shop where Rishita tells him that they shouldn't be involved in the matter.

Later, Dev is filling out the form of permission online while Kamini comes there and tries to instigate him but Dev asks her to not get involved.

After some time, Dhara and Raavi recall their moments with Rishita while cooking and are happy that she stood with them during hard times.

Dev comes there and informs them that he got permission from the municipal corporation to build the second story of the store while Gautam and Shiva also return from the therapy.

Dev and Shiva have a small but non-violent interaction while Dhara packs snacks for Rishita and gives it to him.

Later, Rishita is eating the snacks in pleasure but stops after Dev informs her that Dhara had sent it for her.

Dev suggests that they should return home but Rishita refuses saying that she likes her financial independence.

After some time, the second story is built and the Pandya family inaugurates the welcome while Dev and Rishita also join, completing the family.

Filled with happiness, the Pandya brothers again stamp their handprints on the pillar recalling their childhood moments.

Later, Raavi is doing preparations while Dhara comes there and happily shows her the things she bought for Rishita's child as her first trimester has ended.

Meanwhile, at the store, Rishita gets frustrated seeing more customers at Shiva's store.