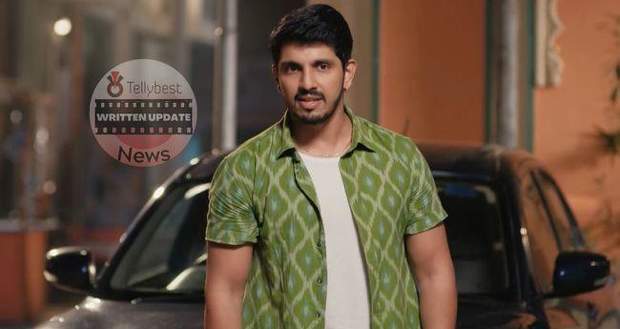 Today's Pandya Store 11th October 2022 episode starts with Rishita stating that she will leave the house if Swetha's bag is not checked.

Swetha clutches onto the bag while the family members try to convince Swetha to give the bag to Rishita to not create more drama.

However, Swetha says that she will not give the bag as it's about her self-esteem.

Rishita says that she will check the bag anyhow and move to take the bag when Krish stops her.

Krish says that Swetha will not open the bag while Suman taunts that Krish has become tied to Swetha even before the wedding.

Rishita tells Dev to learn from Krish as he is supporting Swetha even before their marriage while Dev is not trusting her even after her giving birth to his child.

Further, Swetha and Rishita fight for the bag when it falls and bottles of soft drinks tumble out of the bag.

Swetha starts her drama and makes up a fake story while Rishita asks Dhara for support.

However, Dhara keeps up acting like she is on Swetha's side and tells Rishita to apologize to Swetha.

While hugging Rishita, Dhara whispers into her ear to not ruin plan B and apologizes to Swetha.

Further, Suman states that as to not create any more drama, everyone who was on Rishita's side, i.e. Dhara, Dev, and Shiva along with Rishita will stay silent throughout the whole wedding.

Krish apologizes to Swetha and tries to be affectionate by calling her baby but she tells him that to not do it since she hates it.

Later, Shiva tells the rest of pandya brother's that their plan to get married is going to flop but Gautam calms them saying that they will go through with the plan only if the wedding goes smoothly.

Meanwhile, Dhara calms a chaotic Rishita and further tells her that they can communicate by writing down their conversations.

On the other hand, Swetha enters her room and gets shocked to see Deven there.

She thanks him for saving her and he further tells her that during the wedding, she will keep the bag with jewelry near the pool and will push it into the pool so that no one finds out and he can steal it.

© Copyright tellybest.com, 2022, 2023. All Rights Reserved. Unauthorized use and/or duplication of any material from tellybest.com without written permission is strictly prohibited.
Cached Saved on: Monday 21st of November 2022 08:24:33 AMCached Disp on: Monday 5th of December 2022 12:14:54 AM