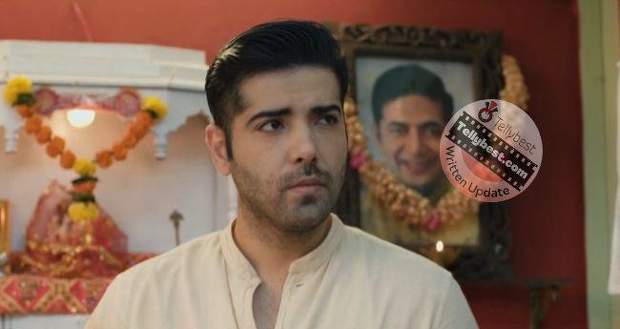 Today's Pandya Store 12th December 2022 episode starts with Raavi touching Shiva on his cheek and questioning if his face is in pain because of her.

On the other hand, Dhara and Gautam wake up after hearing Shweta knocking on the door while yelling that she needs money to buy a coffin for her dead child.

Dhara gets shocked after hearing it but Gautam orders her to fall asleep again as Shweta is just acting.

Meanwhile opening the door, Suman yells at Shweta that she will not even give her the money to buy a coffin as Shweta does not deserve it.

Dhara arrives there at the same time and walks toward Shweta with raging eyes and yells that Shweta has killed her Chiku.

However, she falls unconscious in Gumby’s arms and Dhara wakes up from her nightmare with sweat on her forehead.

She even assures herself that Chiku is safe as Shweta will never do any such thing with him.

On the other hand, lying on the bed, Krish recalls Shweta’s vile words when Dev enters his room silently.

Finding Dev at the entrance, Krish turns around to fake sleep and Dev lies down next to him and Shiva also enters the room just then.

While Shiva also lies down beside Krish, Gautam arrives there and he gets happy seeing his three brothers sleeping with each other like in the old times.

He then starts patting them on their head but when he lies down next to Dev to sleep, Krish sits up and starts crying.

The next morning, while Shweta is asking a cycle owner for help as she needs to go to the hospital, Gautam, Dev, and Shiva who are going to the store on bikes see her and stop on their track to observe.

However, when the cycle owner urges Shweta to sit a bit close in a creepy voice, she jumps from the backseat and runs away.

Afterward, Gomby orders Shiva to check what has happened to Shweta, and elsewhere in the hospital, the doctor informs Shweta that Chiku has a high fever.

Later when Shweta goes to buy medicine from the hospital medicine store, she tells the shopkeeper that she does not have enough money for it.

The shopkeeper refuses to give Shweta the medicine and Shweta tries to run away with the medicine but a nurse stops her.

After Shweta walks away, Shiva arrives there and buys the medicine for Chiku.

On the other hand, in Pandya’s house, Dhara is standing still, when Raavi takes the vegetable away from her to cut it while taunting her that now she needs to do this as she is jobless due to Dhara.

While Rishita scolds Raavi for this, Gautam arrives in the hall and informs Suman about Chiku’s fever in a loud voice.

Hearing this, Dhara runs out of the house, and Gomby, along with Raavi and Rishita follow her.

Later, Dhara finds Chiku alone in the basti and while she is hugging him, Shweta calls her Bacha Chor (Child thief) and urges people to beat her.

While everyone is throwing stones at Dhara, the whole Pandya family arrives there and saves her.

Shweta however orders Dhara to accept that she can never be a mother.

© Copyright tellybest.com, 2022, 2023. All Rights Reserved. Unauthorized use and/or duplication of any material from tellybest.com without written permission is strictly prohibited.
Cached Saved on: Wednesday 25th of January 2023 05:26:58 PMCached Disp on: Sunday 5th of February 2023 03:55:01 AM