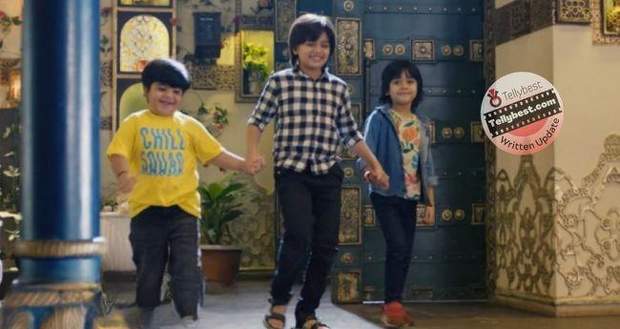 Today's Pandya Store 12th January 2023 episode starts with Dhara telling everyone that the old beggar lady has gone to talk to Mansukh bhai.

Dhara sends Krish to return the money but Raavi taunts her that she sees nothing else than her plan.

At the same time, Shiva’s voice booms from his room saying that he will never get treated with Shweta’s money.

In the Pandya store, the old beggar lady enters with Mansukh bhai while Shweta is furious after knowing that Dhara refused to sell their house to her father.

Shweta threatens the old beggar lady to not ask for money or she will bang her head on the floor.

The old beggar lady shakes off her words and Mansukh Bhai offers to buy Pandya's house along with Pandya's store.

Shweta gets ecstatic thinking Mansukh will buy the house for her but he states she needs to give him money as he cannot spend lakhs for her.

Shweta agrees to pay 10 lakhs but Mansukh and the beggar lady insist she makes 25 lakhs of an offer as she already offered 1 crore through her father.

Meanwhile, Krish eavesdrops on their conversation and runs back to the house while Shweta thinks of plans to fool the Pandya family.

Later, in Pandya's house, Mansukh Bhai and Kaki (the beggar lady) enter the house and everyone welcomes them.

Dhara makes Kaki sit on the sofa and offers her tea which makes Kaki’s heart melt as no one has ever given her any respect.

Afterwards, Kaki warns everyone that it is not easy to fool Shweta as she solely took ownership of their store.

Dhara assures her that they have bucked up against Shweta this time and they will defeat her at any cost.

Rishita gives a wig to Mansukh by which he will hide the earphone and everyone laughs when he wears the wig.

Dhara tells him the plan and states they will win half-battle if Shweta doesn't get to know about the earpiece.

The next morning, Mansukh goes to Shweta and she laughs looking at his hairstyle.

He states he is only Mansukh for her and sings a song which irritates Shweta.

Meanwhile, Gautam asks him to not flirt and focus on the task while Krish warns him that Shweta is still his wife.

Mansukh speaks and Shweta gets suspicious of him, Dhara asks everyone to keep quiet if they don't want to confuse him.

Shweta tells them she will disguise herself as Mansukh’s younger sister and everyone starts laughing saying Mansukh bhai becomes Popat bhai.

Later, Shweta tells them they will stage a kidnapping act in which Pandya members get scared.

Dhara orders Mansukh to tell Shweta about her plan and he suggests leaving honey bees when the Pandya family is signing the house documents.

Shweta praises Mansukh’s idea and asks if it’s his idea or someone else’s.

Accidentally Mansukh states that it's there (Pandya’s) but Kaki saves him by taking the blame.

Mansukh and Kaki walk away and the Pandya family dances in happiness.

The Pandya house is excited to make Shweta pay for her crimes while Shweta is eager to bring the Pandya family onto the streets.