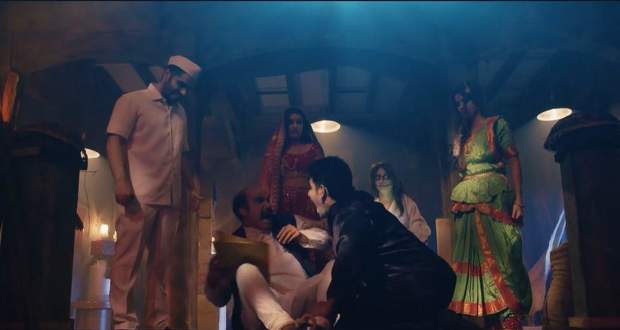 Today's Pandya Store 12th July 2022 episode starts with Shiva making a family picture of the Pandya family with chalk on the wall and remembering his happy moments with them.

The next day, Raavi comes to the police station excitedly with homemade food from Shiva but the police officer sends her back as it's not allowed.

Meanwhile, Gautam is at the bank giving the papers of his land and hoping for the best.

After fifteen days, Raavi rushes inside the police station with Prasad for everyone while the officer tells her that she can meet Shiva only after the papers are submitted.

Just then, they hear the drums playing and Raavi smiles saying that the papers have arrived.

The Pandya brothers enter the police station with the lawyer as the constable brings out Shiva who reunites with his brothers and family.

Afterward, Dhara does Shiva's aarti while the family dances on the road to celebrate his return.

Later, the Pandya family goes inside and Shiva takes blessings from Suman who tells the whole family to not even think about selling the house even after her death.

As the family continues joking, a man from the insurance company comes there and informs them that they would like to make the Pandya family a role model and put their picture in the magazine for their honesty.

The family gets excited and gets their pictures taken after which the insurance guy returns the compensation cheque as a reward for their honesty.

Adding to the happiness, Gautam gives a 50 lacs cheque to Suman from the sold land revealing that the family is now richer by 60 lacs.

The next day, Krish comes back home with money from the bank and notices Raavi being engrossed in trying to increase her popularity on social media.

Later, the family talks about what to do with the money while everyone has different ideas for their reasons.

However, Dhara says that the money should be put into growing the store as their family is also growing.

Just then, Suman shouts at everyone to stop talking.