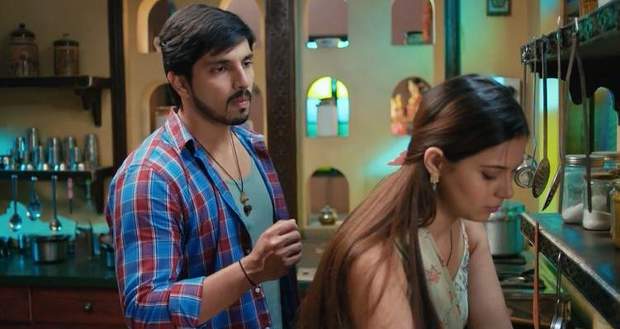 Today's Pandya Store 12th March 2022 episode starts with Suman going to Shiva and Raavi’s room where she couldn’t find any one of them.

Assuming that Shiva has abducted Raavi, Suman rejoices in happiness.

Meanwhile, Dhara hurriedly picks up the stuff for puja and leaves the house skipping the eagle eyes of Suman.

Taking a seat beside Gombi in the car, Dhara prods Dev to start driving as Suman is wide awake.

Raavi feels excited about her wedding and shares her excitement with others while Dhara is struggling to handle drunken Gombi.

Dhara feels shy when Gombi flirts with her in his drunken state while everybody finds it cute.

On the other hand, Suman calls Prafulla to inform her about the progress of the plan.

Prafulla gets frantic when she comes to know that Raavi is with Shiva whom she doesn’t like a single bit.

On the other hand, Raavi is sweetly taking care of Shiva who has not regained his consciousness back.

Raavi gets all romantic and promises Shiva that he will not regret marrying her this time.

Raavi promises Shiva that whenever he will feel sad, she will bring a smile to his face.

Further on, Dhara stops Rishita from taking a room upstairs as it can put a strain on her health.

Rishita doesn’t like Dhara being overprotective of her pregnancy about which she complains to Dev.

On the other hand, Dhara wakes up Gautam, throwing a glass of water on his face.

Seeing the look of indignation on her face, Gautam asks Dhara to forgive him.

Giving a stink eye, Dhara puts forward two conditions before Gautam, that is he has to get the wedding done without any more hitches in the way, and also he has to bring Suman to the wedding anyhow.

Meanwhile, Raavi has a bad dream about Shiva running away from the wedding leaving her alone on the wedding aisle and Suman arriving there at the same time to get her arrested.