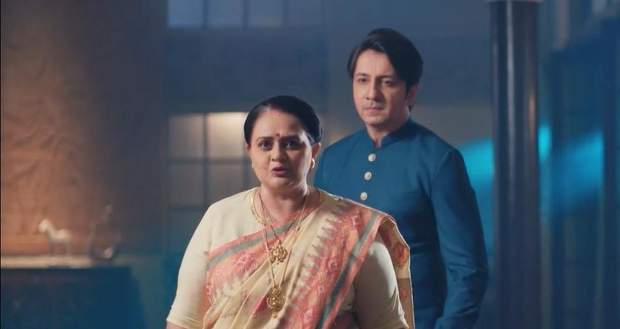 When Janardhan asks about the prasad Rishta happily tells him that she and Dev went to Mandir to do puja to celebrate their 3-month pregnancy.

The whole Janardhan family gets excited after hearing this and starts congratulating them.

However, their mood is detoured when Rishta announces that she and Dev are going to Pandya’s house to tell them about the pregnancy.

Janardhan tries to tell her that Seth’s house is Rishta’s real home so why does she want to visit Pandya House. Rishta counters Janardhan by claiming that the baby is Pandya’s family’s first grandchild so they deserve to know.

At the same time, Dhara arrives with Raavi to congratulate Rishta.

Dhara and Raavi’s arrival pisses Janardhan and Kamini even more.

Rishita says that she is allergic to cardamom.

In the Pandya store, while looking at Shiva’s trophy Gautam gets emotional.

Afterwards Shiva enters the shop and tells Gautam to sit on the owner’s chair.

Gautam gets emotional after sitting on the chair and excited Shiva takes Gautam’s picture.

Meanwhile, Gautam wants to reduce the gap between Dev and Pandyas.

However, Shiva is still angry with Dev but Gautam ignores his words and goes to Dev’s store.

Seeing Gautam at the store Dev and Rishta get excited and start showing him the whole store.

Dev even asks Gautam to sit on the owner’s chair but Gautam refuses.

Gautam states that Dev is the only one who deserves the chair. He asks for a bar of chocolate. After getting the chocolate, he pays for it by claiming that the business rule is the same for everyone.

Later Janardhan announces that tomorrow they will organize a grand puja to celebrate Rishta’s 3month pregnancy.

In the night, Rishta goes to Pandya’s house with Dev.

Seeing them, Suman gets emotional and gives them her blessing. They share dinner with the whole Pandya family.

© Copyright tellybest.com, 2020, 2021. All Rights Reserved. Unauthorized use and/or duplication of any material from tellybest.com without written permission is strictly prohibited.
Cached Saved on: Sunday 2nd of October 2022 12:05:01 AM