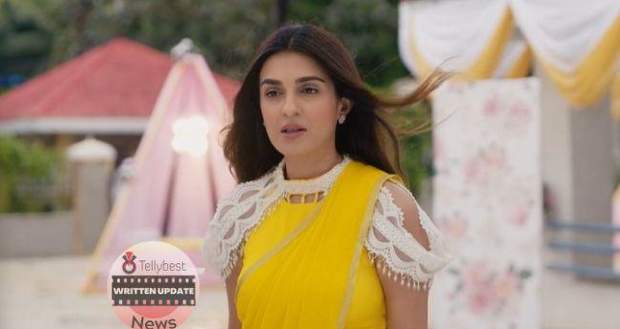 Today's Pandya Store 12th October 2022 episode starts with Dhara and Rishita talking to each other through notes and forming a new plan.

Meanwhile, Deven tells Swetha the new plan and leaves there while threatening her to go according to their plan anyhow.

Further, Dhara and Rishita signal Shiva and tell him to bring Raavi to them.

Shiva tries to tell Raavi but she thinks that he's trying to romance her and tells him to go away.

However, Shiva drags her to Dhara's room and leaves from there.

Dhara and Rishita signal Raavi but she misunderstands them after which they write on their notepad and tell her to bring the jewelry from Suman and keep it near the pool where they will be dancing.

The next morning, Shiva tries to talk to Raavi through signs but she does not understand and gets angry at him as he leaves.

Meanwhile, Rishita tries to tell Dev to take care of Chutki but he doesn't understand and she splashes a jug of water on him while giving him the baby and leaving.

However, Gautam takes advantage of the silent situation and romances with Dhara who acts shy with him.

However, Dev comes there just then and tells Gautam that Suman is calling for him.

Gautam gives Dhara a peck on the cheek and rushes away from there.

On the other hand, Swetha talks to Suman and convinces her to do the sangeet ceremony near the pool.

Elsewhere, Deven adds fake hallmarks to the fake jewelry and thinks that his plan will be a success this time.

Later, the Pandya family does garba and pushes Krish and Swetha into the pool while Deven waits for the jewelry.

© Copyright tellybest.com, 2022, 2023. All Rights Reserved. Unauthorized use and/or duplication of any material from tellybest.com without written permission is strictly prohibited.
Cached Saved on: Monday 21st of November 2022 07:41:15 AMCached Disp on: Thursday 1st of December 2022 02:23:13 AM