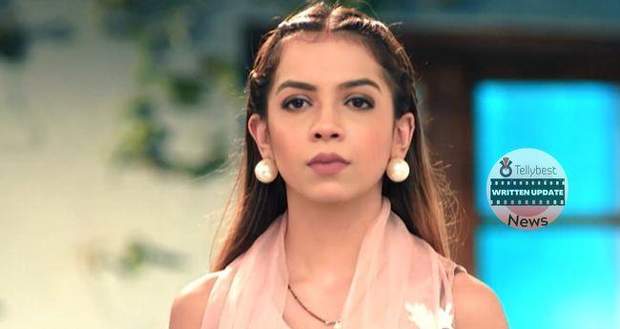 Today's Pandya Store 12th September 2022 episode starts with Rishita taking the bill for the cake from Dhara and taking Dhara with her to the hall.

Meanwhile, Raavi keeps calling Arnav but he doesn't pick up the call making her worry even more as her picture is still not removed from social media.

Shiva comes there and tries to comfort her but she starts talking rudely being stressed.

Realizing her mistake, she apologizes and wears a monkey cap saying that the guests might pity her and not question her.

Seeing her insecure, Shiva tells her to not blame herself and tells her that even if she decides to do a bikini shoot in the future, it should be her choice only and that her Shiva will always be with her.

Elsewhere, Kanta tries to console Suman saying that her children must be worried but Suman refuses stating that they didn't even call her the whole day.

Suman tells Kanta that she will go to an old-age home and live there from now on.

Kanta manages to convince Suman to go home and calls Dhara informing her that Suman is returning home.

Meanwhile, the cake arrives and Swetha helps Krish in putting it on the table as their hands brush together.

Swetha feels giddy that the cake has arrived and messages Forum about it.

Later, Suman enters the Pandya house and the lights turn on with the family members wishing her a happy birthday which takes her over the moon.

Everyone dances while Swetha eyes the cake and inject some sedative into it when no one is watching.

Further, the family members ask Suman if she got surprised but she lies saying that she knew the surprise all along and was just acting along with them.

However, Kanta comes there and reveals that Suman was angry with them and had even thought of going to an old-age home.

The family members apologize to Suman and they all share an emotional moment with them holding their ears and apologizing to Suman.

Later, Suman is retelling old stories to the guests while Swetha goes to meet Forum.

At the same time, Arnav is outside the Pandya house and decides to go inside as he has an important message for Raavi.

Forum tells Swetha that she and other people have prepared a performance for Suman and once they all fall unconscious, she will kidnap Chiku.

As the cake cutting is done, Swetha thinks that her plan is working and she will soon be free from the Pandya family and Chiku.