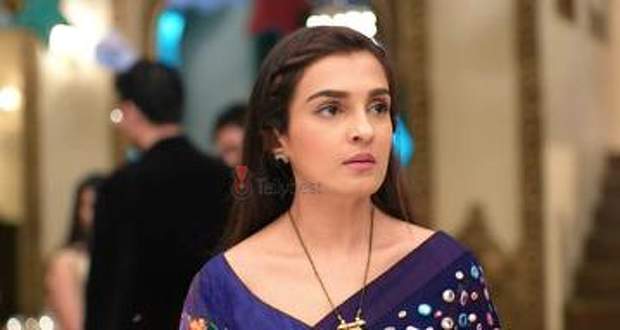 Today's Pandya Store 13th August 2022 episode starts with Raavi tells Dhara that she didn't do anything while Dhara scolds her saying that she should have been able to convince him.

However, Raavi apologizes and requests Dhara to bring Shiva back to the party, or else she won't cut the cake.

Kanta's daughter-in-law taunts that Shiva is jealous of Raavi's success.

Suman gets angry at her and tells her to keep her mouth shut while Dhara goes after Shiva.

Meanwhile, Swetha's parents bump into Shiva as he keeps going toward the Pandya store.

However, before they can reach the Pandya store, Swetha comes there and scolds them saying that she doesn't want to inform them about her baby and they don't have any right to come to Somnath looking for the baby.

Just then, Dhara passes by them running after Shiva while Swetha sees her and gets flashbacks of the accident.

Further, Dhara goes to Shiva and talks to him saying that his being at the party is important for Raavi as he's her strength and not her weakness.

Shiva sits upset saying that he doesn't have any problem with Raavi's success but just wants her to reciprocate the love he has for her.

Dhara tells him that Raavi does love him and orders him to come as she and the whole family will be waiting for him.

Back at the party, Rishita starts getting contractions and tells Dev to help her walk as she tries to put it off as a false alarm.

Dhara returns and Kanta's daughter-in-law again taunts her that she couldn't become a real mother while Dhara's smart reply makes everyone clap for her.

Elsewhere, Shweta tries to convince her parents to return home but they tell her that they won't leave until they get their grandchild whether she wants the baby or not.

At the party, Shiva enters and Raavi happily clutches his hand and cuts the cake as she tells him that she is happy that he came whatever the reason may be.

Meanwhile, Rishita's pain keeps increasing making her realize that she might deliver the baby tonight only.

However, Suman makes announcements and says that she will officially become a grandmother the next day.

Just then, Swetha's mother comes there and announces that it is not possible since she is her maternal grandmother of Chiku and he is their blood.

© Copyright tellybest.com, 2020, 2021. All Rights Reserved. Unauthorized use and/or duplication of any material from tellybest.com without written permission is strictly prohibited.
Cached Saved on: Saturday 1st of October 2022 10:52:32 PM