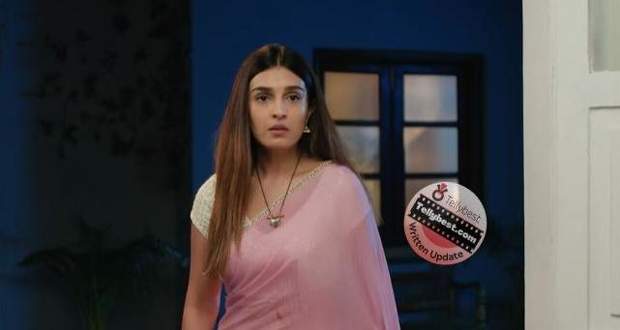 Today's Pandya Store 13th December 2022 episode starts with Shweta ordering Dhara to accept she can never be the mother while Dhara looks shocked.

While Dhara stares at Chiku with longing eyes, Shiva offers Shweta the medicine and urges her to take it for Chiku only.

Shweta who was fuming with anger at that time throws the medicine away and seeing this, Shiva walks away while growling that it was his fault that he thought of helping her.

After the Pandya family walks away looking defeated, Shweta mutters that it is just the beginning as she will bring the whole Pandya family down very soon.

On the other hand, in Shweta’s home, Jhankana notices Harikishan going out with a checkbook and questions him about what he is going to do with it to which Harikishan replies he will buy a flat for Shweta.

Hearing this, Jhankana announces that if Shweta wanted to live with them she would have come to the mansion already, and frustrated Harikishan reminds her that he cannot let Shweta live on the streets like Suman.

Suman who has just arrived there overhears it and announces that she could not let Shweta stay after what she has done to the Pandya family.

She further offers custodianship papers to Jhankana as it is the reason for all the problems in the Pandya family while Harikishan looks at Suman sternly.

Meanwhile, the Pandya family arrives back in the house and Gomby scolds Dhara for behaving like this.

Dhara however questions them if their hearts are not breaking seeing Chiku in such a bad condition in an emotional voice.

Krish then orders Dhara to sit on the sofa so he can treat her wounds and Rishita informs Dhara that her heart also breaks for Chiku but no one can do anything as Shweta is Chiku’s mom.

In the meantime, in Shweta’s home, Suman announces that Shweta knows Chiku is Dhara’s weakness but she will not let Dhara get weak.

Jhankana further yells that even they are also ill so Dhara should keep the papers.

Suman tries to deny it but Jhankana announces that if Shweta gets to access the money she will use the money to fulfill her desires.

Jhankana even urges Suman that if she loved Chiku any little she will take the papers and Suman walks away with the papers feeling perplexed.

Later while the Pandya family is arguing about bringing Chiku home as it means Shweta will come too.

When Gautam announces that their relationship is not that weak, Rishita reminds Gautam about what happened between Shiva and Raavi.

Suman who was entering the house just then overhears it and questions Dhara if she is sure her upbringing is strong and that no one will stumble because if one brick falls it will mean the end of the Pandya family.

On the other hand, in Shweta’s home, Jhankana informs Harikishan that she is lying for Shweta only as except Pandya family no other family will accept Shweta.

Harikishan who is blinded by Shweta’s love grumbles that the Pandya family does not deserve Shweta but Jhankana denies it.