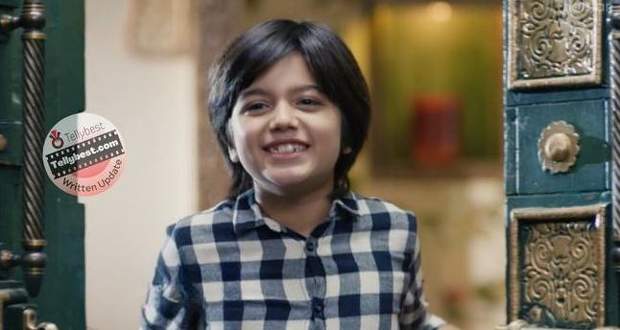 Shweta is wearing a long veil and Manshukh informs her that he has brought the bees.

She warns him to keep the bees away from her or she will bite him like a snake.

Meanwhile, Rishita orders Dhara, Gautam and Raavi to keep their eyes on the property papers.

The Pandya family has brought a bee repellent spray which is hidden beneath Shiva’s wheelchair.

Later, Mansukh introduces Shweta as his younger sister and Dhara acts suspicious of her.

Afterwards, Shweta changes the plan from bees to kidnapping and Dhara hears it from the earpiece.

In the registry office, Suman asks Mansukh to let his younger sister give her the money.

Shweta takes the suitcase reluctantly and gives it to Suman with a heavy heart.

Suman snatches the suitcase desperately and gives her an insulting blessing.

Gautam asks Mansukh to sign the paper but Shweta stops them and asks Gautam to sign first.

Krish comes to sign the papers and Shweta asks Gautam to sign as he is the older one.

Gautam questions her about how he knows that he is the older one and she gives excuses.

Krish signs the papers and then Dev, Shiva and Suman sign.

The Pandya family stalls time while Shweta calls for a gangster to initiate the kidnapping.

A gunshot goes off when Gautam signs the paper, everyone gets shocked by the sound.

Later, Shweta and Mansukh sign the paper without checking while the kidnapper comes inside and grabs Rishita.

Rishita releases the bees and everyone gets scared and starts running.

Shweta sees Mansukh’s earpiece as his wig fell down because of the fright.

When Shweta confronts him Kaki tells her that she sold herself to the Pandya family.

Seeing that their plan is discovered Dhara runs to pick up the original papers.

Shweta snatches the papers from her and Dhara runs beside her.

Chaos breaks down in the office as Suman stops Shweta from running, Raavi is spraying the bee repellent spray to save Shiva from them and Rishita runs to the basement to save herself from the kidnappers.

Rishita finds the documents and gets overjoyed and hides behind an almirah to save herself from the kidnappers.

Afterwards, Shweta and Dahra do not find the documents in the basement and Shweta warns her that she will demolish the store until she finds the documents.

Later, the Pandya family gathers in the basement and Rishita comes out happily and shows them the documents of the store.