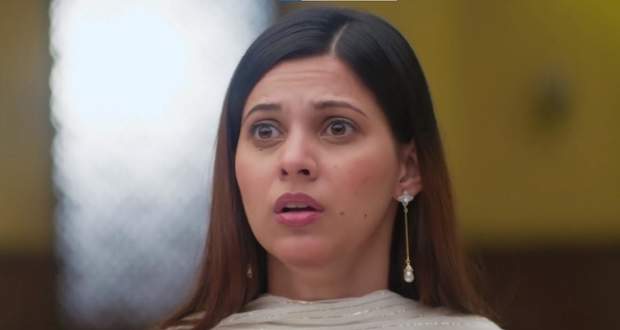 Today's Pandya Store 13th June 2022 episode starts with the bus being about to hit a truck and swerve to the side while Shiva gets lunged near the exit door.

Further, the bus crashes into the side of the bridge and falls.

At the Pandya house, Shiva's friends ask for him while Gautam assures them that he'll be there soon.

Later, at night, the police reach the place where the bus had crashed and call a rescue team to save the alive passengers.

Back at the Pandya house, Raavi is constantly trying to get in contact with Shiva while Dhara keeps the main doors open with the hopes of Shiva returning.

However, due to the network problem, Gautam misunderstands that Shiva is going to return shortly and comforts the family.

Back at the crash site, the police and the rescue teams are handling the situation while Shiva's wallet is seen lying with the bus things.

Gautam convinces Rishita and Suman to take a rest and go to sleep while Dhara and Raavi feel a weird feeling lingering in the atmosphere.

Raavi sees her and Shiva's picture and misses him when suddenly her phone falls from her hand which makes her feel a bad omen.

Later, Dhara is arguing with Gautam over Shiva's return when the TV channel turns on and they learn about the bus accident.

Dhara starts getting a panic attack while Krish goes to bring some water.

Dev enters the main room and gets shocked to learn the truth.

At the same time, Dhara gets emotional and constantly asks if they will bring back Shiva.

Gautam tells Krish that they should go to the location while ordering Dhara that she has to hide this information from Raavi as she is mentally very sensitive.

However, just then, Raavi comes downstairs and looks at him with friends around.

© Copyright tellybest.com, 2020, 2021. All Rights Reserved. Unauthorized use and/or duplication of any material from tellybest.com without written permission is strictly prohibited.
Cached Saved on: Friday 30th of September 2022 05:14:19 PMCached Disp on: Saturday 1st of October 2022 01:42:00 AM