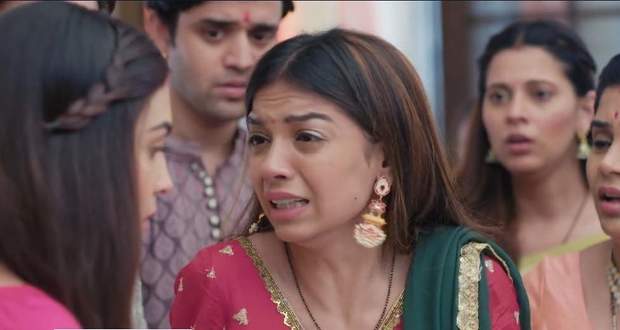 Today's Pandya Store 13th May 2022 episode starts with Rishita and Dev telling the Pandya family that they will be waiting for them at the veneration.

Rishita and Dev keep looking back as they leave after which Suman tells Dhara that Rishita is thinking of coming back.

Getting emotional, Suman says that she felt elated to see her four sons together and make Dhara promise to bring them back.

The next day, Raavi is preparing things for the veneration while Dhara comes there and shows a necklace to Suman asking if Rishita would like it.

Being childish, Raavi says that it's not fair that Dhara gives a necklace to Rishita only.

Dhara reveals that the necklace is her mother's while Raavi goes to get ready.

However, before she can leave the hall, Suman talks to Dhara and says that Dev and Rishita left after Raavi got married into the house.

Shiva overhears them and notices Raavi who stands shocked near the staircase.

Raavi leaves from there in haste while Shiva goes after her.

At the Janardan house, Kamini asks Janardan if he made all the arrangements for the Pandya family and he nods with a smug smile.

Back at the Pandya house, Shiva helps Raavi get ready while she asks if he also thinks that the problems are arising after she entered the house.

However, Shiva comforts her saying that she shouldn't take Suman's words seriously.

Meanwhile, Dhara and Gautam are romancing but get interrupted by Dev's call.

Later, the Pandya family reaches the Janardan house and put the offering sweet with the items for veneration while a servant tells Gautam that Janardan and Dev are waiting for them.

Meanwhile, Janardan talks to Dev about the quotation with double words while Gautam overhears them and wonders what they are planning.

Further, Gautam greets them and they all go to the hall to start the veneration.

During the veneration, Dhara goes to get the holy water for the Pooja while everyone closes their eyes for the prayer.

Kamini adds Cardamom to the offering sweet recalling Rishita reacting to it the previous day.

However, Dhara comes there and questions Kamini seeing her handling the lid of the pot.