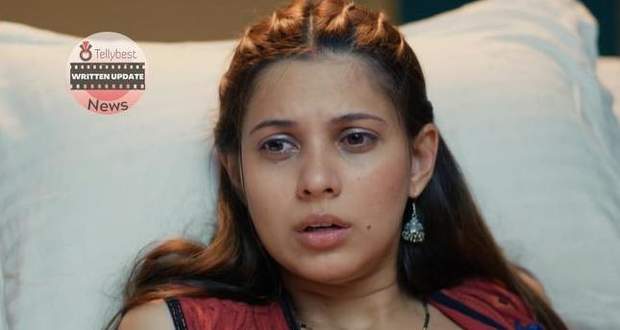 Dhara is also walking in the same direction but before she can see Suman the nurse informs her to meet the doctor since Raavi’s surgery is done and Dhara walks away.

On the other hand, Shweta enters the IT room disguised as the nurse and urges the worker to give her Raavi’s case file.

Shweta lies that she is a new nurse named Shital and needs to send Raavi’s medical report to the doctor when the worker refuses to give the medical report since it is lunch break.

Shweta then offers to serve the worker lunch in a sweet voice and the worker melts.

The husband tries to speak but Suman slaps him hard on the cheek while scolding him for not taking care of his pregnant wife.

Suman further remarks that if the husband lived in a joint family then surely somebody would come to the hospital with his wife, not strangers.

Afterward noticing the husband’s sheepish look, Suman happily announces that his wife has given birth to a baby girl.

The receptionist then orders the husband to send someone to the IT room to bring reports and Gautam orders, Krish, to go.

After Krish walks away, Dev offers Suman some snacks, and Suman praises Dev for being caring.

Meanwhile, Krish is walking toward the IT room where Shweta is busy making the reports.

In the meantime, Dhara questions the doctor if Raavi is okay and the doctor nods.

Meanwhile, Shweta gets shocked after hearing Krish’s voice and decides to run away from there quickly with the reports.

On one hand, Krish urges the worker to give him the lady’s report; on the other hand, the fake reports fall from Shweta’s hand and land near Krish’s feet.

After picking up the report, Krish puts it on Shweta’s desk who has covered her face with some papers.

Krish then walks away with the reports and Shweta offers the worker to take him on a coffee date.

The worker nods eagerly and Shweta walks away with the fake abortion report.

On one hand, Suman and Pandya’s brothers are busy discussing with each other; on the other hand, Shweta meets the junior doctor to hand him the fake report.

Later, the junior doctor cunningly changes the report and even copies the signature.

Meanwhile, a random truck driver enters Raavi’s hospital room thinking she must be his wife but Dhara orders him to leave.

After the driver walks away, Dhara asks Raavi if she will be okay for one hour as she must go home to inform the Pandya family about it.

While walking, Dhara hears Suman’s voice near the entrance but despite looking everywhere she finds no one.

Later, in Pandya’s house, Rishita confronts Shweta about her sudden absence and Shweta lies that she went to purchase Chiku’s medicine.

© Copyright tellybest.com, 2022, 2023. All Rights Reserved. Unauthorized use and/or duplication of any material from tellybest.com without written permission is strictly prohibited.
Cached Saved on: Monday 21st of November 2022 06:36:33 AMCached Disp on: Wednesday 7th of December 2022 11:31:35 AM