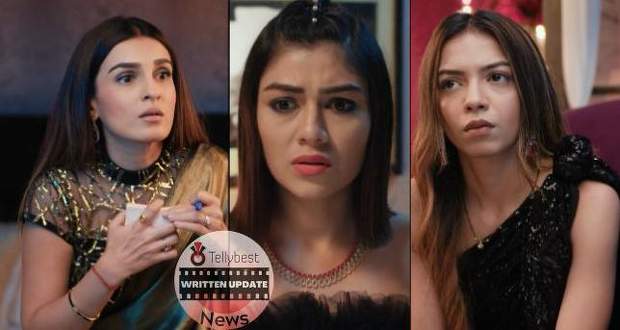 Today's Pandya Store 13th October 2022 episode starts with Swetha dancing with the rest of the Pandya family while she eyes the jewelry boxes.

Meanwhile, Dhara and Rishita keep on looking at Swetha to know what she is planning.

Swetha further flings her hand at the jewelry boxes and they all fly into the air.

The boxes open up and the jewelry falls into the pool.

Deven starts getting to work while Suman pushes the family members into the pool to collect the jewelry.

On the other hand, Deven lies on the floor of his room with his leg bleeding due to the injury as he curses the Pandya family for thrashing him.

Back at the pool, Gautam reveals his plan for the remaining three Pandya brothers to also marry their wives again while Krish says that the marriage cannot happen.

Krish says that there's a problem with Chiku and everyone gets shocked.

However, Krish comes forward and smiles as he explains that they have to decide if Chiku is from the bride's side or the groom's side.

On the other hand, Deven tries to get ready so that he can escape but finds it very difficult with the injury.

At the same time, Swetha argues that Chiku is from the bride's side since he is her son.

Krish argues that Dhara also has equal rights as she took care of Chiku and raised him.

Suman tells Swetha's mother to come forward with Chiku with the decision that the person whom Chiku will lean toward will be the winner.

Swetha tries to persuade Chiku who leans towards Dhara making Krish and others clap in happiness.

Later, the Pandya family dances while bringing the Baarat towards the Mandap.

However, Suman tells Raavi that she wants to talk to Rishita and Dhara alone and sends her to dance with Shiva and others.

Dhara signals Rishita to go and check on Swetha while Krish calls Dhara onto the platform.

Suman realizes that Rishita is not behind her and hopes that any scene is not created at the wedding.

Meanwhile, Rishita stands in front of Swetha who gets shocked to see her there.

© Copyright tellybest.com, 2022, 2023. All Rights Reserved. Unauthorized use and/or duplication of any material from tellybest.com without written permission is strictly prohibited.
Cached Saved on: Monday 21st of November 2022 06:55:46 AMCached Disp on: Thursday 1st of December 2022 02:23:50 AM