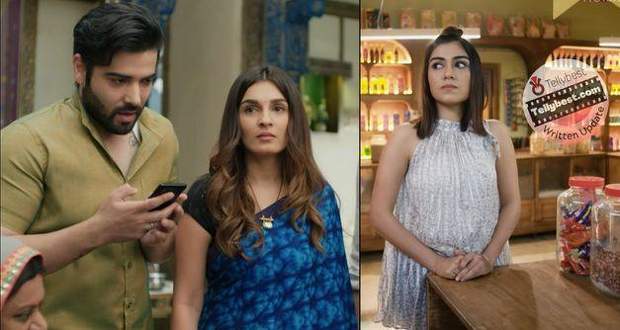 Today's Pandya Store 14th January 2023 episode starts with Rishita informing the family that she had gone there to escape from Swetha but found something important.

The family gets anxious while Rishita excitedly reveals the Pandya Store's documents to the whole family.

She tells Dhara to take care of the documents while Dhara tells the family that they have to reach the shop before Swetha destroys it.

Later, Swetha starts her bulldozer and is driving towards the Pandya store while another bulldozer interrupts.

She gets shocked to see Rishita and Dev driving the bulldozer while Krish comes there bearing the suitcase worth money and giving it to Suman.

The family members taunt Swetha saying that she lost as they are going to get the shop, the money, and Chiku also.

Swetha feels anxious as she tells the Pandya family that they have betrayed her while Suman taunts her and states that the leader of the betrayers is calling them out.

Further, Dhara climbs the bulldozer and drags Swetha to the ground as the Pandya family celebrates their victory.

Swetha looks at all of them with bulged-out eyes while grinding her teeth.

Suman calls her stubborn and tells her to apologize while Swetha argues that she will never apologize to them.

Suman and the family members laugh as Suman tells Swetha she will get punished for sure.

She takes the rope from Gautam and gives one end to Dhara while the other to Rishita as they tie Swetha using the rope.

Rishita makes a scene as she tells the onlookers to clap for Swetha.

Suman mocks Swetha telling her to go home while Dhara says that Swetha does not have a home and will stay in the streets only.

However, not wanting to accept defeat, Swetha tells the Pandya family that she will take her revenge while Dhara force-feeds her sweets and tells her to get out of their faces.

Suman stops Dhara and signals Krish who hits the board with Swetha Store written on it destroys it in front of her while the family watches it in pleasure.

Rishita and Krish walk all over the board to torture Swetha who acts tough in front of them.

However, as Swetha hops away due to her legs being tied together, the Pandya family makes fun of her by calling her different names.

The Pandya family dances while Dhara says that she will dance once Shiva gets better and tells Gautam to call the police.

Raavi annoyedly says that it is good that Dhara remembered Shiva's condition as she thought they will remember only after celebrations.

Raavi further calls the hospital but the receptionist informs her that Dr. Joshi is on leave and will return only after the holiday celebrations.

© Copyright tellybest.com, 2022, 2023. All Rights Reserved. Unauthorized use and/or duplication of any material from tellybest.com without written permission is strictly prohibited.
Cached Saved on: Wednesday 25th of January 2023 09:28:19 AMCached Disp on: Wednesday 1st of February 2023 06:02:43 PM