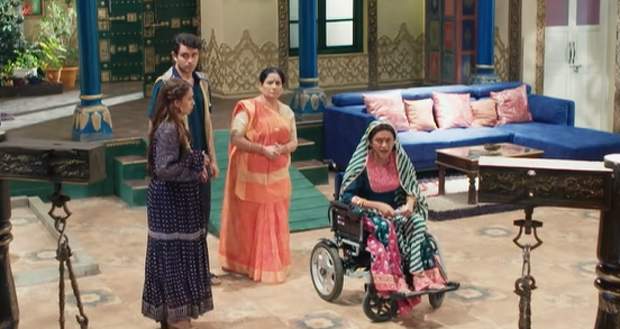 Dhara starts scolding Dev and Shiva for always keeping the AC and geyser on in their room.

However, Suman tells her to not put the blame on others and states that she will not pay the huge bill amount with her own money.

Pandya's brothers reveal that they don't have any money while Dhara requests Suman to pay the bill for this month.

Suman thinks to pay the bill but gives punishment to the family members to teach them a lesson.

She orders the family members to turn off the fuse and then stand with one leg and hands in the air.

However, Suman gives Rishita the responsibility of checking if the remaining family members do their punishment correctly and seeing if their AC and geysers are turned off or not.

Further, the drama is accidentally shown live through Raavi's phone.

Later, Raavi realizes that the live was kept on accidentally and goes to delete it but stops seeing the huge increase in her follower count.

Instead of doing the right thing, Raavi blocks her family members from her account so that they don't know her mistake.

Afterward, at the shop, Dev gets taunted by a customer for not giving any discount while Janardan's shop is giving them an 80 percent discount.

Dev and Shiva argue with Janardan about using the Pandya family's name and discrediting them while Gautam stops them from creating a fight.

Later, Dev talks about buying the shop from Janardan so that the Pandya family's name does not get discredited while Dhara overhears them.

Elsewhere, Raavi gets recognized by some people at the market due to the punishment live which boosts her ego.

Dhara takes Gautam home and proposes that they should build another shop with the remaining money instead of letting it eat dust in the house.

However, Gautam misunderstands Dhara's words and accuses her of keeping competition with Suman which hurts her emotions.

On the other hand, Krish brings a diamond necklace for Keerti from a local brand while she asks him if he talked to Rishita about them.

© Copyright tellybest.com, 2020, 2021. All Rights Reserved. Unauthorized use and/or duplication of any material from tellybest.com without written permission is strictly prohibited.
Cached Saved on: Sunday 14th of August 2022 12:44:23 PM