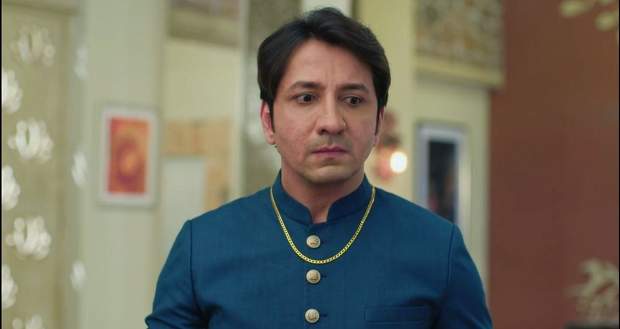 Dhara sees Kamini closing the lid of the Prashad.

On asking about it, Kamini says that someone had left it open and she was just closing it.

When Rishita tries to open the necklace box, Kamini stops her from doing so.

She asks Rishita to keep it near the pooja so that it gets blessed too.

While everyone is busy praying, Kamini quietly steals the necklace and hides it in her saree.

As the pooja is about to get over, Janardhan invites Gautam to have a seat with them in the front room.

He then offers him a juice intoxicated with alcohol. Naïve Gautam is forced to have two to three glasses of juice until he loses his senses.

After the pooja is over, unaware of the added cardamoms, Dhara asks Rishita to have the Prashad.

Rishita after having the Prashad feels an allergic reaction in her body. She feels like vomiting while all the family members rush to her aid.

Rishita accuses Dhara of purposely adding the cardamom to the prashad. She claims that Dhara is jealous of her and the baby and so she added the cardamoms despite knowing that she was allergic to them.

Dhara does not agree with anything Rishita said. She asks Rishita why would she (Dhara) even bother giving her the necklace if she was jealous of her, only to find out that the necklace box was empty.

The necklace belonged to Dhara’s mother and was very precious to her. After seeing the empty box, Rishita is furious and believes that Dhara did all of it just to humiliate her.

In the meanwhile, Shiva finds Gautam in an intoxicated state. Janardhan accuses him of being drunk.

Gautam finds it hard to control himself and goes back to the pooja in the drunk state.

Dejected Dhara, whose aim was only to bring the broken family together, demands CCTV footage of the pooja scene.