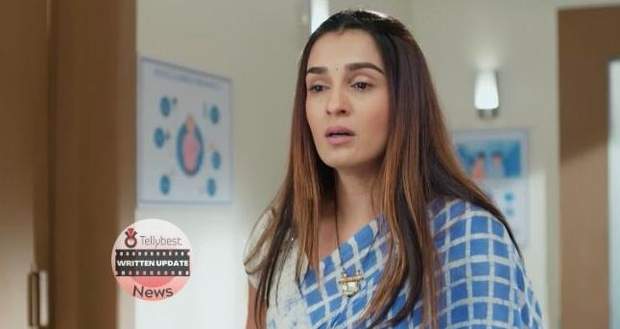 Today's Pandya Store 14th November 2022 episode starts with Rishita showing Shweta the pregnancy test kit and questioning her about it.

Rishita questions Shweta why she is doing this while Shweta thinks she will break the truth when everyone will come home otherwise it will not be fun.

Meanwhile, the Pandya brothers and Suman enter the house simultaneously and get shocked to see Rishita and Shweta in front of the god.

Finding the holy bell in Shweta’s hands, Gautam points out that this is not the time for prayer and Suman whispers that maybe Shweta is possessed and to this Dev worriedly remarks that his wife is also standing near Shweta.

Suman however orders Shiva to bring two brooms so she can beat Shweta and Rishita with them while Dev again questions her if Rishita is possessed too but Suman mutters that she does not know yet.

On the other hand, Rishita snatches the bell away from Shweta’s hand and orders Shweta to reveal why the pregnancy kit was in Shweta’s room.

Rishita further screams that neither Shweta has any relationship with Deven nor with Krish when Shweta lowers her eyes.

Rishita even screams that Raavi’s relationship is not in a good position and Dhara cannot get pregnant even if she tries while Suman starts walking towards them.

However, Suman stops on her track abruptly when Rishita questions Shweta if she has brought this kit for Suman’s pregnancy test.

Hearing the question Shweta puts her fingers on her ears while the Pandya brothers turn around feeling embarrassed.

Crying Suman then scolds Rishita for accusing her like this to which Rishita apologetically replies that she did not mean to say it but slipped her mouth.

Even Dev comes forward to scold Shweta for thinking something like this and Shweta apologizes again.

Turning to Krish, Rishita informs him about finding the pregnancy kit in his room and Krish replies that he does not even know Shweta well, so he has no idea about the kit lowering his eyes.

Krish further yells that Rishita has tried to humiliate him and even Shiva tries to give Krish marriage advice but Gautam orders him to move away.

Meanwhile, Shweta comes forward while questioning Krish with tears in her eyes about how he can reveal this to the whole family but Krish averts his eyes.

Rishita however again asks Krish if he and Shweta have any relationship but after replying negatively Krish runs away from there.

Rishita then starts questioning Shweta if she has found any new man in her life but Shweta runs to throw herself in the water.

After Gautam and Dev stop sad Rishita, Rishita informs everyone that Raavi is pregnant which surprises everyone.

Elsewhere, in the hospital, Raavi gets happy thinking when Shiva will learn about her illness he will come rushing to the hospital.

Meanwhile, Shweta reveals to everyone how she has found Raavi’s pregnancy and Raavi being in a city hospital.

Overjoyed Suman along with other family members starts congratulating confused Shiva and Suman further announces that they should celebrate but Shiva runs away.

© Copyright tellybest.com, 2022, 2023. All Rights Reserved. Unauthorized use and/or duplication of any material from tellybest.com without written permission is strictly prohibited.
Cached Saved on: Monday 21st of November 2022 04:22:21 AMCached Disp on: Saturday 10th of December 2022 01:58:58 PM