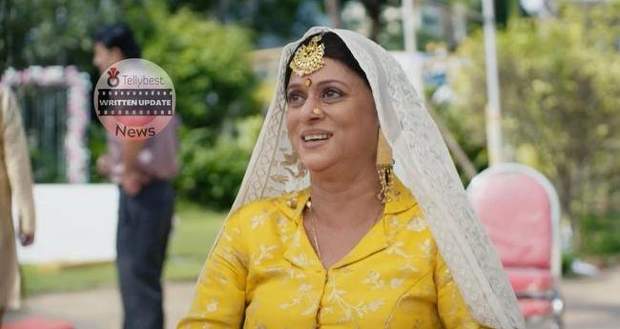 Today's Pandya Store 14th October 2022 episode starts with Krish telling Dhara that he is indebted to her his whole life for taking care of him.

On the other hand, Deven puts a bandage on his injury and calls Swetha for help.

He sends a plan to Swetha asking her to help him leave the place with the real jewelry.

Swetha thinks that she has to help Deven so that she can leave without any worry.

However, Rishita comes there just then and tells Swetha that she wants to be her friend as she helps Swetha dress up for her wedding.

Dhara gets worried as the baarat proceeds toward Mandap and gets to work.

Raavi asks Suman to give them the jewelry so that they can put it in the mandap but Suman refuses and insults Dhara unknowingly.

Seeing the expression on Dhara's face, Suman agrees to give them the jewelry along with the responsibility of it.

Further, a fake hallmark gets removed from the jewelry, and Raavi gets shocked to see it and tells Dhara about it.

Realizing the true situation, Dhara informs Rishita on the call about them failing to protect jewelry which shocks her too.

Elsewhere, Swetha tries to escape from Rishita to message Deven but Rishita doesn't let her go.

Further, Dhara tells Raavi to take her place and goes from there while Suman keeps arguing with Raavi thinking of her to be Dhara.

On the other hand, Swetha manages to get away from Rishita and hides in the bathroom while reading Deven's massage and thinking of a way to help him.

Suman tells comedy and Raavi laughs while Suman gets suspicious and asks her why it is similar to Raavi's laugh.

Meanwhile, Deven thinks to not stay for Swetha as it is risky there and starts packing his bag.

As Deven is leaving, Dhara is also calling from the same place and gets confused as she sees Deven and realizes that it is him.

Dhara sees the bag in his hands and wonders if Deven stole the jewelry and is leaving with the real jewelry.

© Copyright tellybest.com, 2022, 2023. All Rights Reserved. Unauthorized use and/or duplication of any material from tellybest.com without written permission is strictly prohibited.
Cached Saved on: Monday 21st of November 2022 05:14:36 PMCached Disp on: Wednesday 7th of December 2022 12:26:26 PM