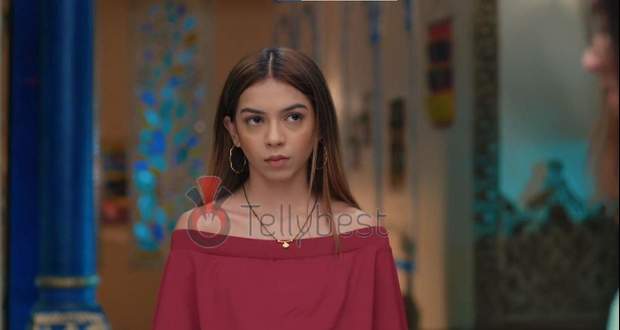 Today's Pandya Store 15th August 2022 episode starts with Swetha's mother announcing to the party and saying that Suman cannot be the grandmother.

However, nobody listens to her as they get distracted hearing Rishita shout that the baby is coming.

Dev runs to her and Rishita pulls on his hair out of frustration while the family members try to calm her.

Krish informs them that there is a strike of the transport vehicles after which Gautam tries to contact the doctor.

Meanwhile, Swetha takes her parents aside and tells them that they should leave as the place is in chaos but her mother begs her and sends her with her father to the car.

Inside the house, Rishita is made to lie down on a bed while the Pandya ladies conclude that they cannot wait for the ambulance as Rishita's water has broken.

Suman says that she will deliver the baby and instructs the ladies to collect the necessary items while the Pandya brothers are sent out of the house.

Meanwhile, Swetha's mother enters the Pandya house while the Pandya brothers try to calm Dev who is crying out of anxiousness.

The Pandya ladies get busy in Rishita's delivery preparation while Swetha's mother takes advantage of it and steals Chiku.

Swetha's mother leaves with the baby while Shiva notices her and goes after her.

Elsewhere, Swetha tells her father that they should not steal the child and leave when she gets shocked to see her mother coming with the baby.

However, Shiva comes there and confronts them while Swetha's mother argues that Chiku is their grandchild.

Shiva takes Chiku while Swetha's mother insists she tells Shiva that she is the mother of the child.

Swetha gets flashbacks of Dhara saving her while Shiva tells them to leave from there before he calls the police and leaves from there.

Back inside the house, Dhara notices the crib empty and goes out to ask the Pandya brothers while Rishita gets angry.

Just then, Shiva comes there and gives the baby to Dhara but doesn't have the heart to tell him about the lady who tried to steal Chiku.

Afterward, the Pandya brothers try to calm a panicking Dev by talking to him about the baby's future.

Just then, they see a rickshaw driver arguing with Hasmukh Uncle and go to solve the situation.

However, the driver misbehaves with Gautam which leads to the rest Pandya brothers beating him up.

Police come there at the same time and arrest them for fighting.

© Copyright tellybest.com, 2020, 2021. All Rights Reserved. Unauthorized use and/or duplication of any material from tellybest.com without written permission is strictly prohibited.
Cached Saved on: Saturday 1st of October 2022 12:26:53 AM